Aphid: their friends and foes 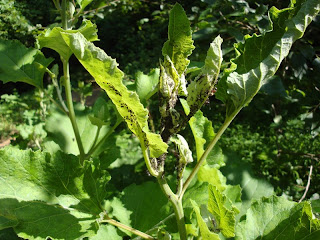 From a distance they look like a mass of speckles on the stems, but when approached and a close look is made, tiny insects can be seen. They are one to ten millimeters long and often you can see more than one size on a stem. They are aphids, in the super family Aphidoidae, of the order Hemiptera. 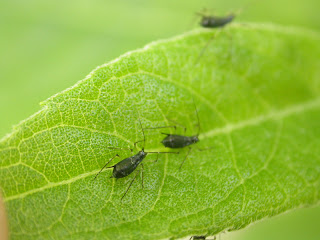 I have seen red, yellow, orange, green and black ones. Out of the 1,375 species currently identified I wouldn’t be surprised to see shades of blue or purple. Even with soft bodies, the bright colored aphids don’t seem to make any effort to hide. The tiny insects certainly don’t run away when approached. Rather, aphids will all shift from one foot to another, like the wave flowing across the stadium during a football game. Teasingly I have moved my finger close just for the fun of watching them move 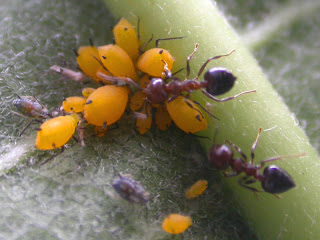 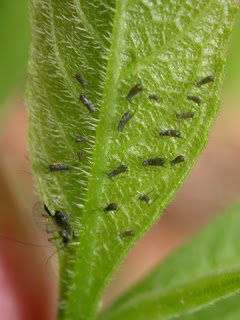 Once in a while I will come across an aphid with wings. According to Wikipedia, “when host plant quality becomes poor or conditions become crowded, some aphid species produce winged offspring, “alates,” that can disperse to other food sources.” Imagine if humans could do that! It would be a different world indeed. 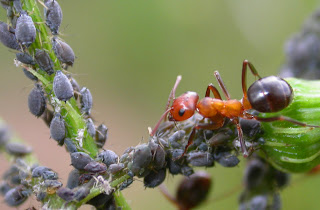 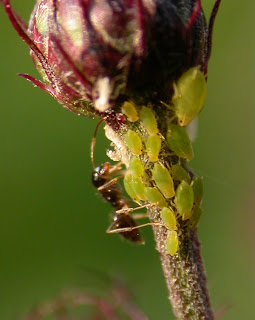 One of the most interesting things about aphids is their mutualistic relationship to ants. The ants sip up the discarded sap called “honeydew” from the aphids’ recta. Sounds gross until you consider the fact that we love to eat bee spit mixed with flower nectar and call it honey. Milking the “ant cows” is a common way of describing how the ants stroke the aphids with their antennae to stimulate release of the excess sap, rich in carbohydrates. In turn the ants act as protectors against other insects that would devour them or use their bodies as baby incubators, like the black aphid parasitic wasp (Aphidius rhopalosiphi). A common predator is the Lady Beetle (Coccinellidae) often brought in as the hired gun to rid the garden of these plant suckers. The most effective predator, so I’ve read in Sue Hubble’s book, Broadside and Other Orders, is the Green Lacewing larvae (Chrysopidae). It can eat up to 200 aphids in a week. 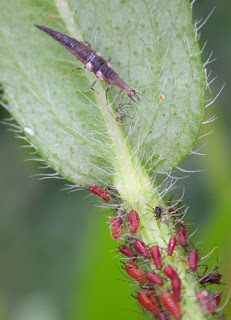 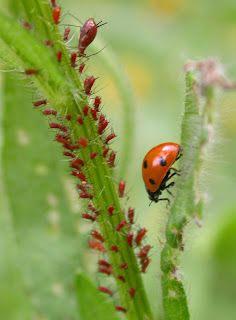 Aphids are considered an agricultural pest and something to rid ourselves of, but I find them fascinating to watch and study. Sometimes our foes are not as awful as we imagine.
Posted by squirrel at 3:39 PM

Fantastic! "Honeydew" Ewwwww.
The photos are mesmerizing. Thanks for taking us into that miniature world. I learned a lot!

They are monophagous which means they eat only one plant species. They use their beeks to pierce the phloem vessel of the host plant, then the sap just runs into their aphid stomachs. They don't even have to suck because the pressure of the vessel just forces the food in. Ewwwww again. The word verification for this comment is "reartly". Appropriate don't you think. LOL

Rear artly indeed!
I have a new nickname for you:
Aphid whisperer
I love the idea of you "teasing" the aphids!

I'll send you some of my mantid babies! they are SO cool to watch!!

this is ONE COOL blog! So glad you stumbled upon me so I could stumble upon you!

What a great post...I started and read all the way back here. Please do come and join Nature Notes, I would be happy to have you....Michelle