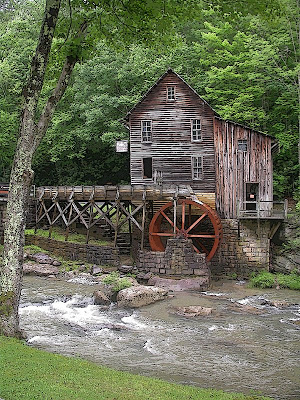 The rain had just let up as Zac Babcock walked down from his modest cabin to open up his grist mill on Glade Creek. As, every morning, he looked at the broken board along the side, he thought he would fix it when he wasn’t busy, but he never seemed to get around to it. “The mice don’t steal too much and they are god’s creatures just like me.” 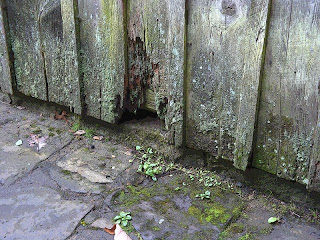 He went around back to check the overshot wheel. Standing silently, listening, he could hear the low deep beat of the water as it entered the buckets and fell onto the wheel. It was the heartbeat of the mill. He purchased the overshot wheel from the miller at Spring Run up in Grant County when his mill burnt down and this was all that was left. “Waste not, want not,” as his mama taught him. “Kids nowadays just waste what they have,” he thought. The sight of the bees on the laurel reminded him he had better get on inside and start up the grinding.

“Mornin’!” the Preacher said, as he stepped into the doorway. 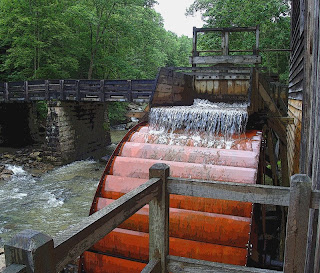 “Just about finished, my oldest boy is filling the last sack now,” hollered Zac as he lifted out his toll with the flat spoon. He felt a little guilty because it was a damp morning and more of the flour stayed on the spoon as he lifted out his share. On hot dry days more fell off so he reckoned it all evened out over time. 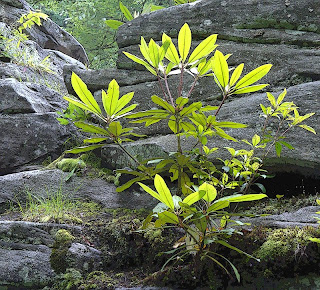 “You goin’ to the town meetin’ tonight?” the Preacher asked. “We’re aiming to stop Mr. Massy from cuttin’ down all our trees. I heared tell he don’t even live in these parts. Got a big mansion over Richmond way. The mountains are getting purtnear bare and all the dirt, hits washing into the creek. The missus complains she can’t git my Sunday breeches clean like she used to.”

“Don’t do no good just fretten – ya gotta go to Charleston and get those hi-fluoot’n gummit guys to do something. Make some laws to stop em,” Zac mumbled.

“Well,” replied the Preacher, “If we don’t do somethin’ soon they’ll carry off the whole mountain top after all the trees are gone and the coal mines are empty. Mark my words. I reckon there’s just no end to the greed in this world.”

Zac put some of the extra flour that had stuck to the toll spoon, back into the preacher’s sack.

“Billy, git over here while I walk out to the wagon with the Preacher. Keep yer nose to the grindstone, I don’t wanna see burnt corn meal when I return. Be back dreckly.”

“Will we see you tonight at the meeting?”

“Shore’nuf, something got to be done and soon!”

Photos were taken at Glade Creek Grist Mill in Babcock State Park and altered in Photoshop to give them a fictional look to compliment the fictional story.

ABC-Wednesday
Posted by squirrel at 7:47 AM

Interesting take on B! I love the picture of the old mill!

I can imagine how that old mill inspired you to people it with local folks. What a treat to witness your imagination at work.

Thank you all for visiting my blog site, and for your encouraging words. We ALL have so much to say but there are very few listeners, like yourselves, in the world. Thank you for hearing.

I am enchanted with the old mills.
Wonderful story.
Will we get to read more?
Surely there is an old church ....
ABC Wednesday is interesting. I love your creative way!
Sherry

On behalf of the Team, many thanks for your contribution.

You have a wonderful blog. The photos are spectacular. I have added myself as a follower. Stop by my blog sometime for a visit.

I saw you over at Kate's blog and could not help but notice your name. I just had to come over for a visit and I am so glad I did.

I love the photos of the grist mill they remind me of others I visited growing up in the South. The story is wonderful, I hope there will be more.

I will be following and do hope you will drop by my blogs as well.
Have a great day,
SquirrelQueen

What a great story, and likely close to true.