My nature writing book group has been reading Robin Wall Kimmerer’s Gathering Moss: A Natural and Cultural History of Mosses and last weekend we decided to go on our own moss walk. I knew where to locate a variety of mosses but not what species they were. The five of us gathered along the Shenandoah River in the Shannondale Springs Wild Life Management Area (SSWMA) parking lot. Right off the bat we found cold bees sitting on wingstem (Verbesina alternifolia) a member of the Asteraceae (Aster family). They were waiting for the air to warm up and to begin sipping nectar and doing the important job of pollination. 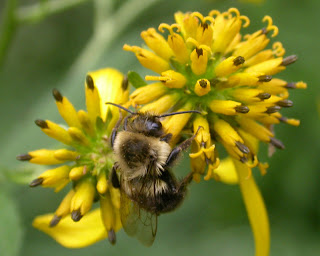 Long-tongued bumblebees along with butterflies, wasps and flies visit wing stems. It is also a host plant for Silvery Checkerspot butterflies (Chlosyne nycteis).

The common name came from the side wings on the stems. Once you see you will most likely remember the common name. 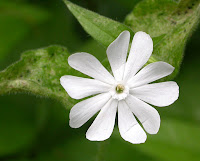 Another flower we found at the edge of the parking lot was White Campion. Trillium remarked that she remembers this common name because it looks like it is carrying a pack of supplies for a CAMPing trip at the base of the flower. I thought that was a good little trick to help remember. I thought of the BBC mystery series Campion adapted from the writing of Margery Allingham that I love to watch. He would always place one in his lapel.

Our final destination was the Rolling Ridge Foundation, next to SSWMA, where we set up a table and small portable microscope. We found about 10-15 different species of moss. With hand lens and the microscope we marveled at the different structures of each one. 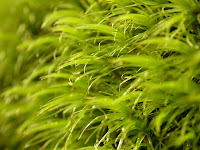 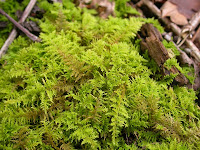 I was particularly impressed with one that had twisted peristome and brought a sample home to look under my more powerful scope. I think it is in the family Tortula but I am not certain.

Peristome is a combination of the Greek words peri, meaning around and stoma, meaning mouth. So in mosses there is a little cap like an elf’s cap that is attached to the tip of the operculum (the brown stems that shoot up from the moss). When the spores are mature that tip falls off and you can see the opening called the stoma. If you look closely with a hand lens you can see that the opening is surrounded by peristome with teeth. Most of the teeth are short but in the case of the Tortula they were long and twisted. Way cool. 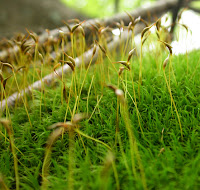 Down by the creek I spotted a female walking stick. It was the first female I have ever seen and had it not been walking I surely would have missed it. 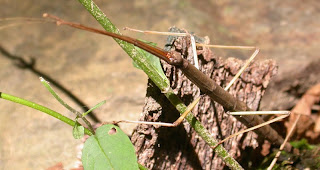 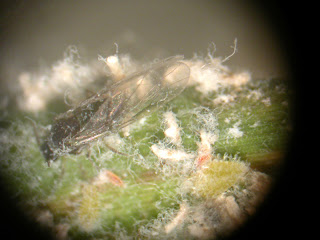 On the way back to the car a stick with weird insect stuff was brought to my attention. I brought it home to get a better look and I’m guessing they are Woolly Aphids a member of the Aphibidae family in the order Hemiptera.

It was a joy to spend the morning with fellow Master Naturalist making discoveries in our neck of the woods.

Wonderful summary of our morning! I love the new look of your blog.
Could you add comment on what a peristome is?

How do you tell a female walking stick from a male Cheryl? I guess I could google it, but have never thought of it before.

Trillium, thank you for the compliment. I will update the blog with the peristome information. Good Question.

I love moss! I get so sad when I see homeowners tear it up to plant grass. I would love more moss to grow in my tiny yard! Great photos!

Wanda, that is a good question. I don't actually "know" it is a female. I assumed it was a female Anisomorpha buprestoides because it looked so fat in the abdomen and it was very large. The local common males that I usually see is pictured in my Sept 15 blog about invisibility. That one clearly has claspers at the tail end used in mating and the one we found on the moss walk had a different end, like you might expect to find in an egg laying insect. I had a long debate with myself before I even decided it was a walking stick. It looked a little like the Indian Stick Insect, Carausius morosus but that just didn't make sense given our location. Hope this helps.

Kate, thank you. I had to laugh because I wish I had more dirt and flowers growing in my yard. It is pretty rock and damp so I get a lot of moss. I guess the grass is always greener. I don't know why everyone wants to tear it up...I mean you don't have to mow it, and you can't get much better than that!

I love mosses (and ferns). I think they are the coolest plants. Thanks for the really up close views, too.

It's always fun to ramble about with you, Squirrel. You always find great stuff.

Carolyn, I agree. I have been trying to find someone local to teach us mosses for years but have not had any luck. Liverworts and lichens are also cool but difficult to distinguish between species. Have you seen "Outstanding Mosses & Liverworts of Pennsylvania & Nearby States" by Susan Munch? I found it very helpful. I think she teaches somewhere in your state.

Woodwalker, "back at ya" as they say. I love insect like you love plants. And the cool part is that insects and plants are very dependent on each other so we end up learning about both in the process.

What a wonderful idea for a group. I used to keep a nature journal before I started my blog with little drawings and such... Maybe I should start up again... I love the idea of a moss walk too.. Wish I could find some like minded people here... Michelle

Michelle, I am lucky that I have found this group. We have a Master Naturalist Program in WV and the reading group came out of that. You might have one in your state as well. I have been checking around and it seems a lot of people have started using blogs instead of keeping a journal. I'm still using both, my blog sometimes comes from the journal. I am enjoying your blog as well.

Rambling Woods, if you want a like- minded group, you might have to start one yourself! That's what I did! (Re writing group) However, there's so many wonderful people to be found by joining groups like Audubon and Sierra, or local conservancy organizations... I also find Quakers aka Religious Society of Friends very sympatico, not just on spiritual views, but as nature lovers...To me that is the same thing almost!