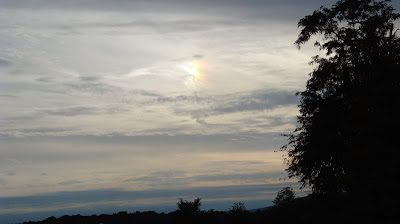 On my way home from work last Friday, as I drove through Virginia’s horse and wine country, I spotted a Sun Dog low in the sky. Quickly, I pulled onto a side road and took this photo. In my neck of the woods I usually see most Sun Dogs during the winter months because they are formed by ice crystal (diamond dust) in the air at low levels. In truth, they can be seen all through the year but I don’t think to look for them during the warmer months. During that time they seem to be higher in the sky where the colder air is found.

The scientific name is “parhelion” meaning “beside the sun” and they can be either on the right, left or both sides of the sun. Sometimes when I have seen two of them, one will be brighter than the other. They are always at the same level in the horizon as the sun.

In the photo you can see the typical colored patch of light with the reddish side closest to the sun and the other side fading into blue or as picked up on my camera, white. They are a type of ice halo. I neglected to take a photo of the sun and the Sun Dog in one shot because I was in a hurry to continue toward home to feed my own dog.

Go and check out more Skywatch images at the Skywatch Site!

Beautiful sky...I love to see the Sun Dog, I have only seen this a few times...great capture...

Not only an incredible picture. But a new phrase and a new word: sun dog and parhelion. I love them both!

Lovely shot. I always stop for a look when I see them, too. I think we need to make up bumper stickers that say, Caution: I brake for sundogs!

Beautiful sky photo and an interesting description.
Thanks for sharing.

An excellent sky shot. Good info, too. Maybe I can now find my own Sun Dog! Happy SWF!

lovely capture of the sun dog...
have a good weekend.

Wow! That is a really cool.

Great capture and a wonderful photo! Thanks for sharing your sky.

love your view of the sky and that is a wonderful Sun Dog photo, creative idea ...cheers and happy sky watching, I am trying to return to blogging and it is nice to see your blog. I learned a lot about Sun Dogs!

Such an interesting occurence and thanks for the information too. I'm not sure I ever saw one or perhaps recognized for what it was.

I know of them, but I have never seen one personally...

I didn't know about Sun Dogs! I will be looking for one around these parts, now. Have a super weekend!

I love seeing them. Here it is usually late afternoon and traffic when we do and it isn't always easy to pull over.
Nice framing with the tree!

We get sundogs here in BC. I had never noticed, but you are right they are usually in the winter months. I just took a flying trip to Los Angeles. I invite you to come see some of my sky shots. - Margy

These are such fascinating phenomena. You did a great job capturing it.

I like Deborah's suggestion for a bumper sticker, too.

I've only seen them a couple of times. Kewl capture and interesting post ;--)
Hugs and blessings,

Angels in my life said...