As promised here is some information on Jumping spiders. They are in the Family Salticidae and there are over 300 species in North America. So far I have only photographed eight; I guess I have a long way to go. Mostly I see them at my porch light when I am looking for moths. They feed on the insects that show up and tend to stay put while I snap a picture. They are considered diurnal even though I can find them at night. 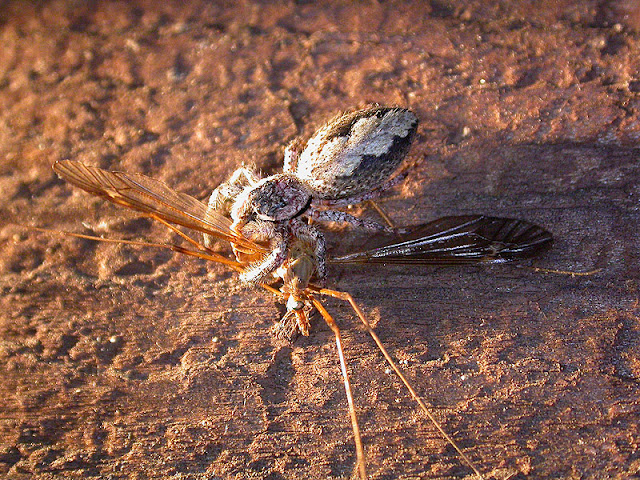 Platycryptus undatus eating a cranefly
When I have found them during the daytime they run and jump away too fast for me to focus but I have managed to catch a couple such as this Hentzia palmarum (Longjawed Jumping spider). They are capable of jumping as high as 25 times their own size. Somehow when their blood pressure rises in their limbs their tiny bodies leap by way of released pressure. Gee, I wish my high blood pressure worked that way, I could leap tall buildings in a single bound. 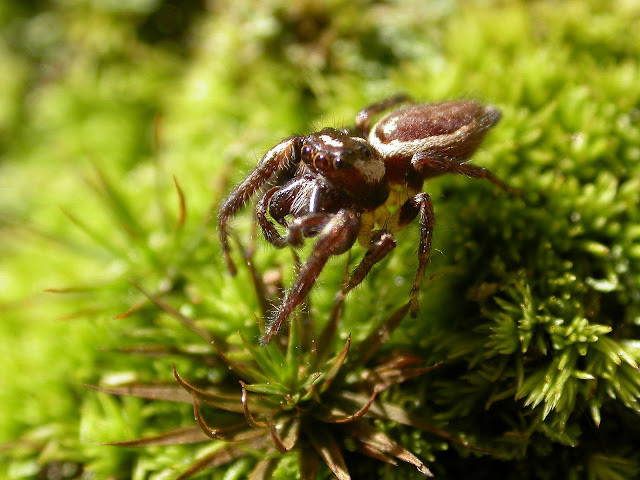 Eris militaris (Bronze Jumper) on moss.
They also have superior eyesight, four eyes in the front or face area and four on the highest part of their carapace. They are arranged in three rows called the ocular quadrangle. The two big ones (medial eyes) in the front that look like headlights and make them so cute have limited perspective and high resolution. The other eyes have a wider field of view. Combined they have good vision up to several inches, color vision and some depth perception. 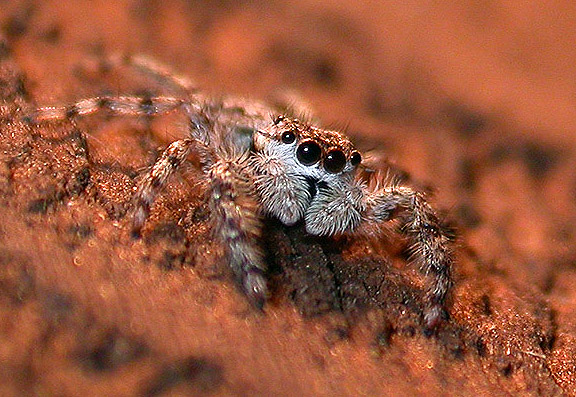 Platycryptus undatus
Jumping spiders do not weave webs but they do use silk to mark retreats and to protect eggs. You can see how this one has a line of silk just in case it wants to leap onto an unsuspecting insect. 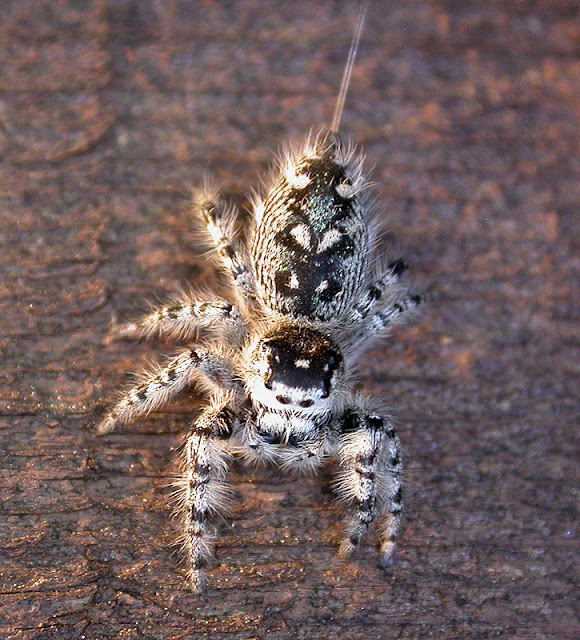 Platycryptus semilimbatus
While I was photographing this Platycryptus semilimbatus it kept waving me off. The photo is blurry but you can see what it was doing with its front left leg. As the camera would approach it would wave. Is that cool or what! Some of them also do a similar waving action when they are courting a female. If you want to really see that in action just search YouTube for jumping spider courtship and watch. It is very impressive and reminded me of Birds of Paradise courting rituals. 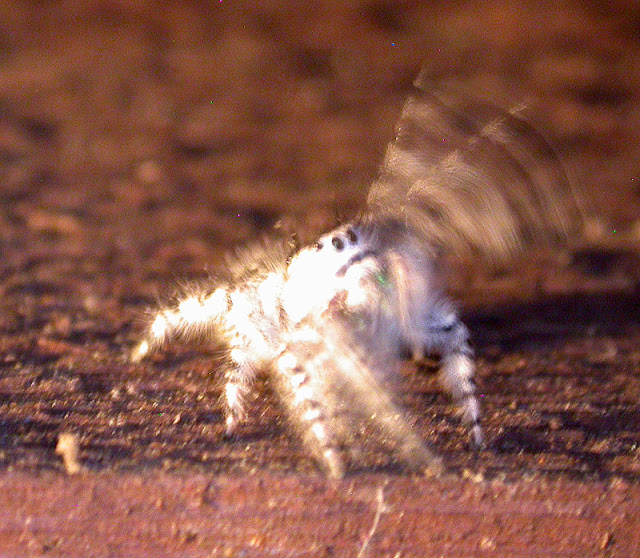 Platycryptus semilimbatus
I’m not sure if this female Peppered Jumping spider was catching prey here or if the web was for the babies but I think she was hunting. 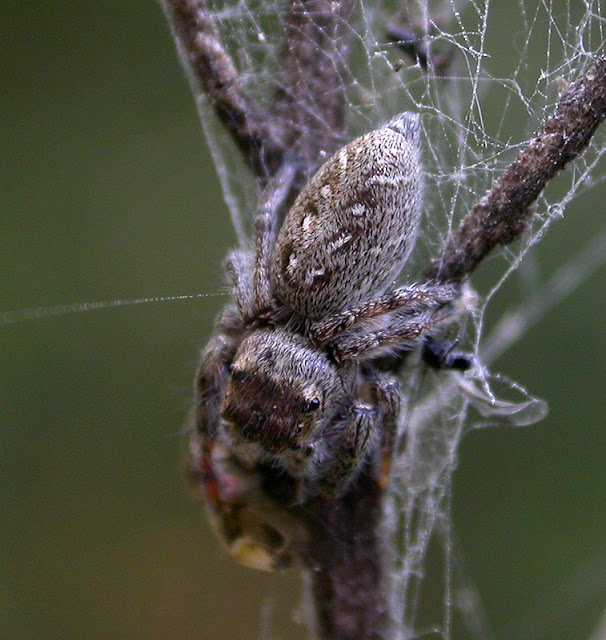 Pelegrina galathea (Peppered Jumper female)
The life expectancy of a jumping spider is around 2-3 years. They do engage in combat to claim a female during mating season and as a result the females generally live longer and mature first. It takes about a year for them to mature.

One interesting thing I have noticed about them is that the carapace can be pivoted 45-degrees. The first time one turned and looked at me it was a little startling. 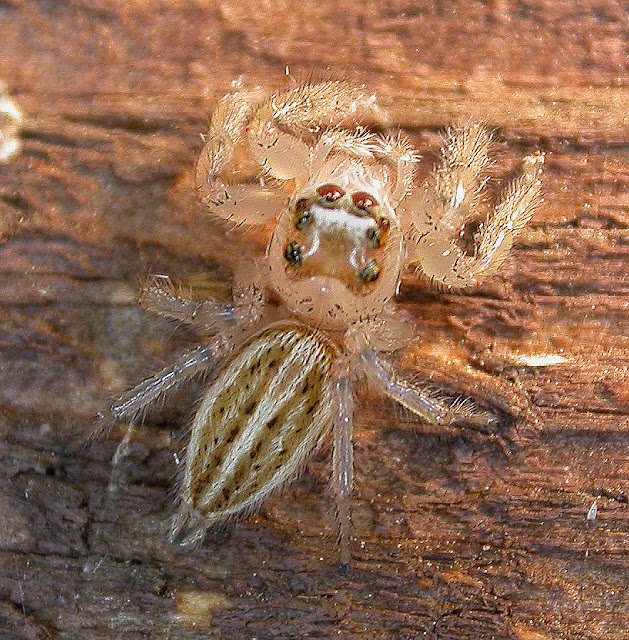 Thiodina sylvana female
Some jumping spiders can be very colorful such as the Phidippus apacheanus and the female Eris marginata seen below. 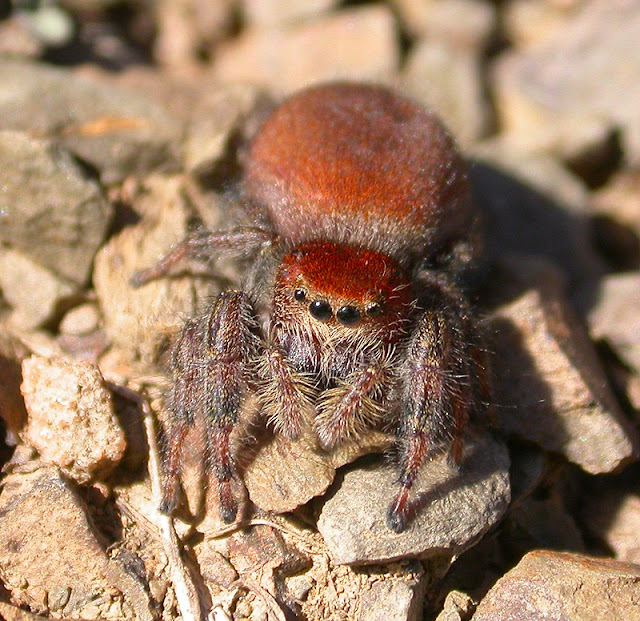 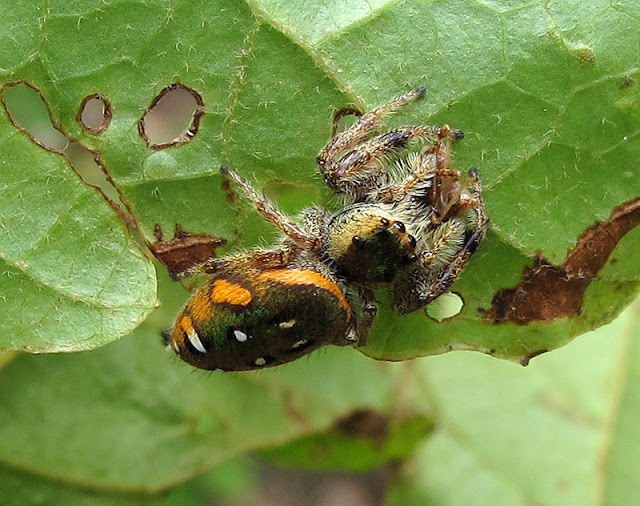 Paraphidippus aurantius  female
Posted by squirrel at 11:21 AM

Wow, just amazing spiders and photos. It is a good thing I am not creeped out by spdiers. You have shots of some I have never seen before.

Thanks, spiders are really fun to look at this time of year. I think I'm on a roll and will post more about them in the next few days. Once I start learning about a species it is hard to quit.

I just love jumping spiders. You have some great shots here - esp. the one waving!

Thanks Ellen, the waving one is my favorite as well.

Eileen thanks for the nice compliment.

These are amazing little spiders. They are the ones that helped me get over my fear of spiders...Michelle

Do you know that although Jumping spiders look peaceful, they are active hunters that stalk and pursue prey until close enough to attack? See more: http://www.jumpingspider.net/