“Oooooh Yuck, I ran into another one!” These are common words in the hills of West Virginia as hikers explore during the fall months. “I’m getting a stick to wave in front so I don’t walk into another of those darn spider webs.” You’ve heard it, you’ve said it, but hang on a minute and take a look at what you are knocking down. The spider that builds that web is called the Micrathena gracillis pronounced my-cruh-THEE-na grah-SILL-us. The common name is Spined Micrathena. In doing research about these spiders I learned how remarkable they are and now I will be reluctant to wave my hiking stick out in front. I hope to find them before they find me and take a closer look. 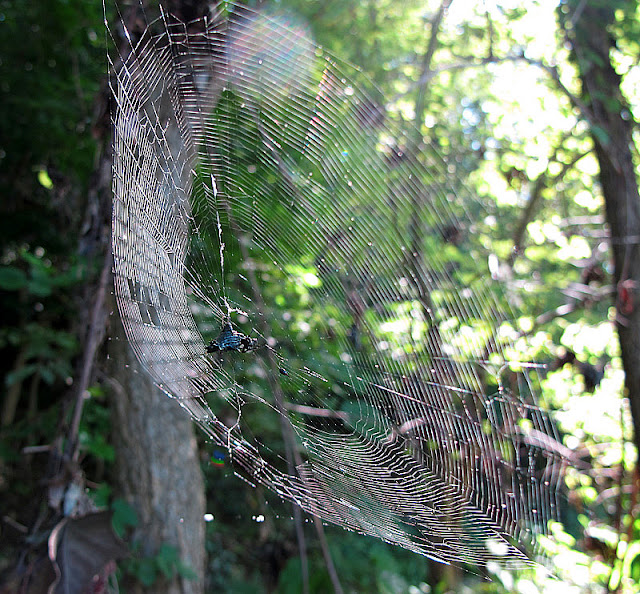 You can see the angle of the web and the spider in the middle.
They build their webs 3-7 feet off the ground and give them a vertical or up to 45 degree horizontal slant so they are perfect for catching flies going up and down and people walking the trails. They like the larger Diptera but they are not too excited about people. According to J. Michael Biere and George W. Uetz they orient their webs in such a way to optimize the solar radiation requirements it needs to regulate its body temperature. The female M. gracillis builds her web at sunup and when the sun goes down she eats her web leaving only the strong main lines. It is only those tightly coiled lines that are sticky and feel yucky on my face and glasses. 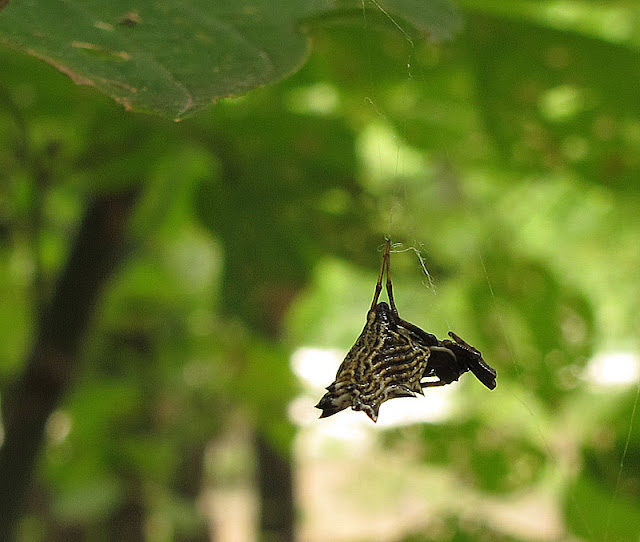 Most of the time when I find these spiders I see them hanging upside down in the middle of the trail, the web is there but not always visible because of the angle. Perhaps if I was a creature looking for a spider to eat I might not see it from the top because the darker brown/black color would blend in with the leaves if I was looking down. And if I was looking up from the group I might not see the spider because of the white back that looks like an opening in the tree canopy. I’m not sure if that is a true adaptation but it is something to think about. 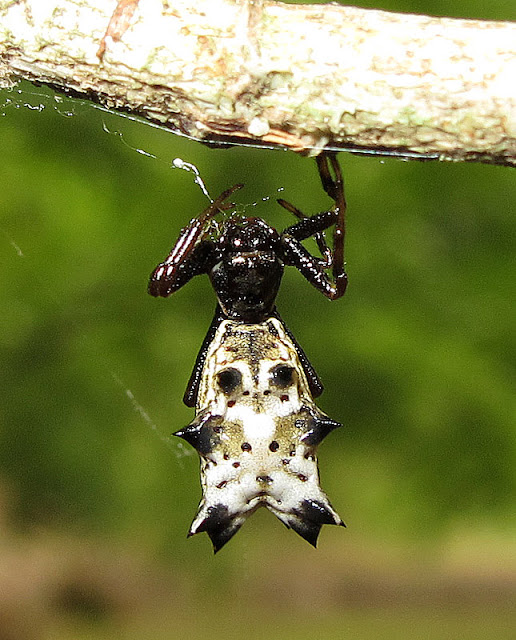 Spined Micrathena are in the family Araneidae (orb-weavers). The females are 7-10 mm and the males 5 mm. The specie’s range is the eastern U.S. from Massachusetts south to Florida and west to the Rocky Mountains. 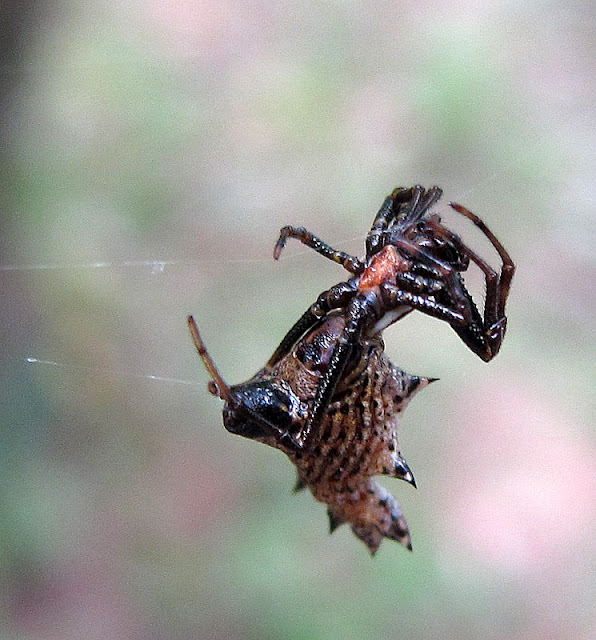 On the internet I read that these spiders make a stridulating sound that is said to be a low-pitched buzz and is audible to us if we are nearby. I’m not sure I believe it since I have not been able to verify the source but it is worth listening for next time I am out. 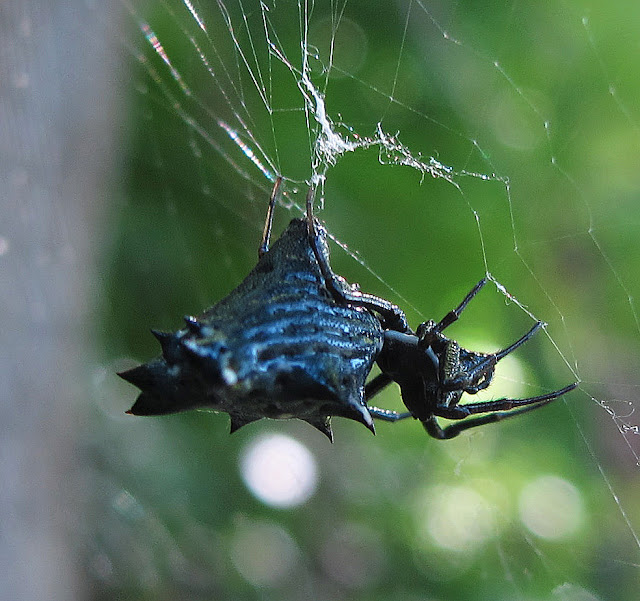 Another thing to look for is the male. He is supposed to be nearby and ready to mate. He is half the size of the female and has no spines. His body is elongated and dull colored. He doesn’t build an orb web but does build a “mating thread” that links him to the female’s web. That might be a way to find him if you see a single line going off in another direction. The female has been known to kill the male for food. Speaking of food, I wonder how the male catches prey; perhaps he steals it from the female’s web, I don’t really know. There is still much to learn and observe about this spiny little lady.
Posted by squirrel at 1:54 PM

wow! what exquisite shots!
it's really hard to pick my favourite.
great close-ups, too!

Betty thanks for the nice compliment. I love CC and visit often. Squirrel

Very interesting spider posts. I got a couple of crab spiders this year, but I never was able to see them make a catch.

beautiful spider shots!!
and i know just what you're talking about...walking with the stick in front...waving it back and forth...
walked into many a web! ugh.

i'm enjoying all your spider pictures and info!

I don't think I have ever seen webs that big. Of course I haven't been in my western NY woods lately either.. fascinating...