On the first day of February we had usually warm weather with the temperature up in the high 50’s to low 60’s. So it was perfect for a winter walk without slipping and sliding on the ice. I didn’t start out until around 4 o’clock so I chose to go to nearby Shannondale Spring WMA, just up the road. My goal actually was to exercise but it is difficult for me to not stop and look for signs of insects.
Once I was up by the big meadow I stopped to look in the Pines and Junipers. There are usually egg cases for Mantis in these trees and sure enough I found two in one of the smaller trees. 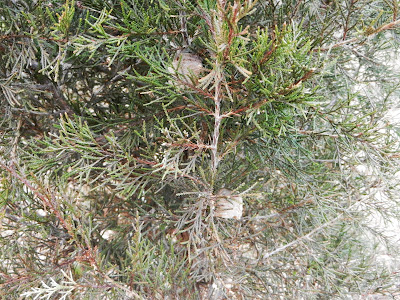 Next I spotted two spider egg sacs right next to each other. One below is  the egg sacs of Mecybigea lemniscata a member of the Araneidae family.  They are called basilica orb weaver spiders because their webs look a little like the old roman basilicas. They build a orb web and then pull it up from the middle to create the dome. The strand that these eggs are hanging from is very strong and looks like a thin string.  I found several more on other trees. The sacs are held together by a covering of a thin layer of white silk. 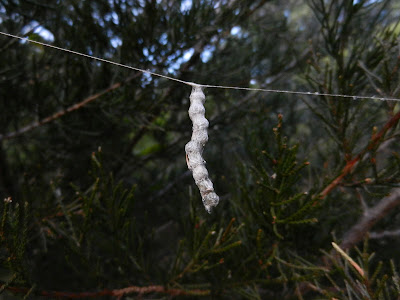 The other egg sac I believe was from a Brown Widow , Latrodectus geometricus in the Theridiidae family. The egg sac is actually a spherical egg sac but it is covered with regularly spaced tufts of silk. 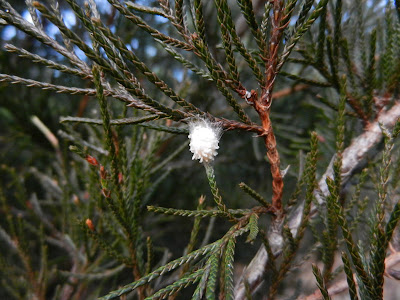 Then I found this curious looking thing. At first I thought it was an insect egg case, then a gall and finally I concluded it was Gymnosporangium juniper-virginianae (Cedar-apple Rust).  This is the first time I have focused on a rust and found it very interesting. This plant pathogen uses juniper and apple trees to complete its life cycle.  On the apple tree the infections occur on the leaves, fruit and twigs. It is appears as brightly colored spots that develop tube-like structures on the under surface of the leave in late summer.  On the cedar host, the fungus produces reddish-brown galls from ¼ to 1 inch in diameter with small circular depression with a pimple-like structure in the middle. 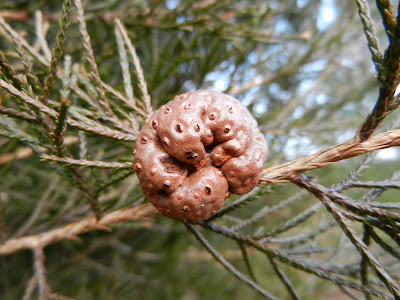 In the April and May these elongate into orange gelatinous protrusions that bear spores during the rainy periods. The wind carries the microscopic spores to infect apple leaves creating a complex cycle alternated between the two host plants. In July and August, spores from the apply leaves are produces and the wind carriers them to the cedars where they germinate and produce first a small, green brown swelling about the size of a pea and then to the larger mature gall I found. 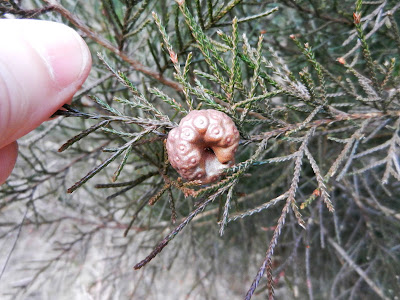