In preparation for the West Virginia Butterfly Atlas I am participating in a friend and I went to Elkins for training on how to fill out forms and other butterfly related things. Since gas is so expensive these days we decided make get the most out of the trip by making lots of stops on the way to take photos of butterflies and other nature goodies.

In the previous blog I showed the Juniper Hairstreak I found on this trip. Our next stop was at Squirrel’s Gap (always a good name) where I found a little female Brown Elfin. It was a first for me and an exciting find. 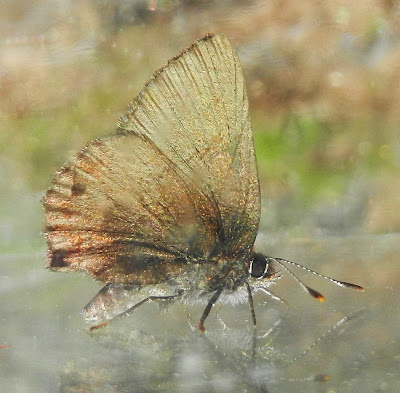 The next stop was near Cabins high up on the side of the mountain where we found pines and the habitat for Juniper Hairstreaks we were seeking. 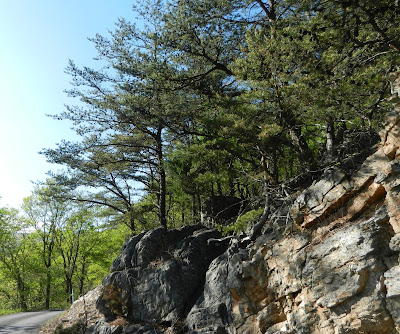 I did find one but the view was the spectacular part for me. 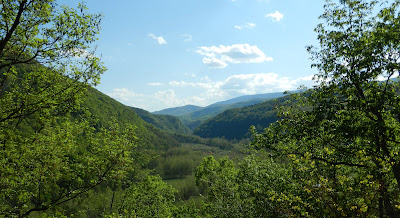 From there we drove into another county and down White's Run Road. I did find a West Virginia White butterfly and an American Lady butterfly. 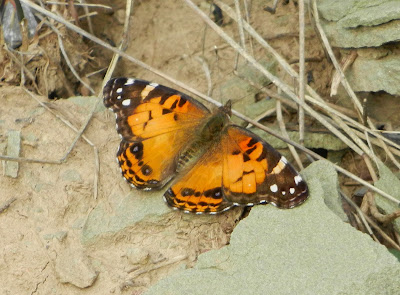 As we were driving along the creek I noticed an Owl sitting on a log the crossed the creek. It was so perfect that I first thought it was a fake and then tried to quietly say, “STOP!” As we slowly backed up the owl flew but not so far and we were able to idle the car up to its new location. It was a Barred Owl. I didn’t want to get out of the car and took this photo from the opposite window so it is a bit fuzzy but you can still tell how wonderful it was. 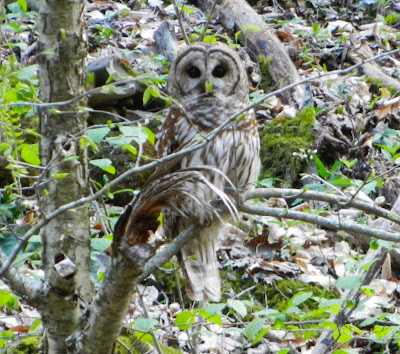 Moving on up the mountain we made another stop at the crest where again I was wowed with the views. Down below was what meadow with lots of black cows with a few of them lined up heading back to the barn. 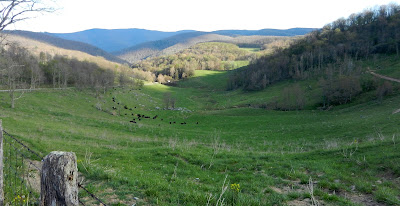 Nesting nearby was a Killdeer quietly sitting hoping we wouldn’t notice. 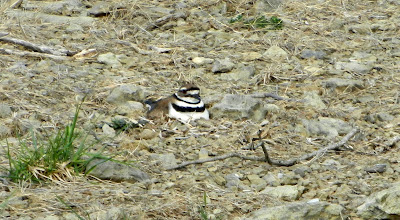 I just couldn’t get enough of the view from this site. 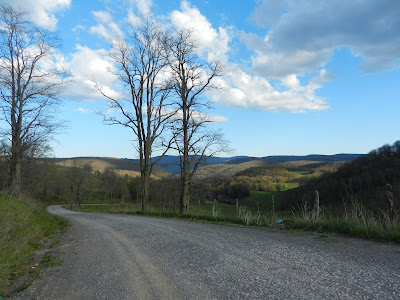 The last stop was at Seneca Rocks for me to get a quick photo. I just never tire of looking at these either. I must have a gazillion photos in all seasons and weather. It is hard to imagine that those rocks were once ocean bottom and after all the folding and bending that took place to form the Appalachian Mountains these were turned on their edge. Now through erosion they have been exposed. It’s might seem rather odd that we find these rocks beautiful given that a small piece of it is really nothing to look at but this size it quite grand.

wow! what fun photos, and that owl rocks...I wish I had some interested folks to do some of that sight seeing with, but no interested parties near me.. so I normally go on my own...I always enjoy seeing your posts. robin

Beautiful. The owl shot is amazing. Fun post. I have relatives from Elkins, Buckhannon, Clarksburg, Dunbar, Hurricane, Moundsville, Gauley Bridge...well, you get the idea!