I would say that the best part of my adventure I have had so far was exploring the tide pools near San Simeon. I was with my nature nerd buddies and her family and I had a blast. The water was cold and my tootsies were freezing but I didn’t want to stop; there was so much to see. If you have followed my blog before this big adventure you will know I love noting better than turning over leaves and looking on bushes and rocks for insects and other odd things, so this was right up my alley. 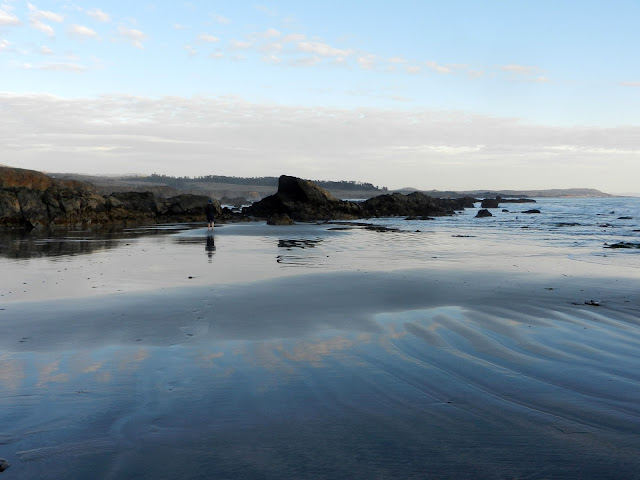 I was informed that the tide was very very low and we should find lots of good things and indeed that was the case. I friends and guides were even impressed with what we found. The first thing that was pointed out to me was the Aggregating Anemone (Anthopleura elegantissima) and it was a good thing she pointed to them because I would have thought they were just clumps of sand. During low time, they cover their tentacles with small bits of shell material and retreat to keep from drying out. 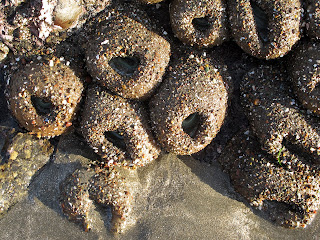 We found three other anemones; at least I think they were all different. One was a Giant Green Anemone (Anthopleura xanthogrammica) at least I hope that was what it was. The green color is really microscopic sized algae that live in the tissues of the anemone. In a mutual relationship the algae produces oxygen and the anemone produces carbon dioxide used by the algae. 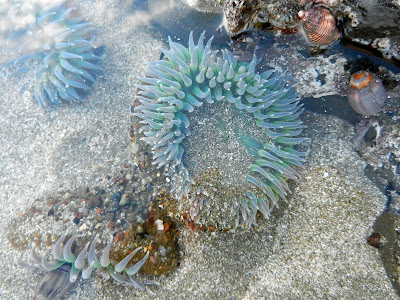 The third one looks very similar to the Giant green but it has some red and the tentacles don’t look as long. I think it is a Stubby Rose Anemone (Urticina coriacea). Please if anyone really knows what these anemone are please let me know, I would appreciate it. This woman from hills of West Virginia is really out of here element and I would love to learn.

I not writing about these in the order that we found them but rather I have lumped them into groups. The next group is Sea Stars and I was kindly informed that they are not star fish. It is a common mistake much like calling all gulls “seagulls”. I know, I know Jonathan Livingston Seagull was famous be he was just a gull like all others. Anyway we found many sea stars. The most common on the beach was Ochre Sea Stars (Piaster ochracceus). 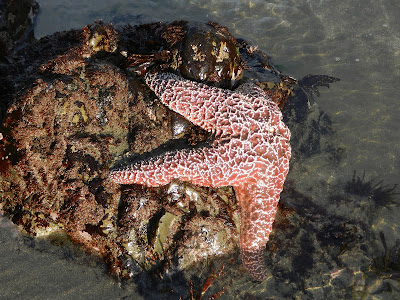 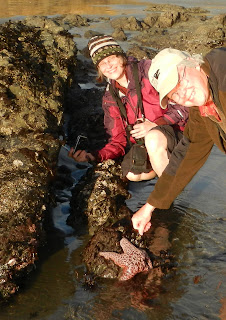 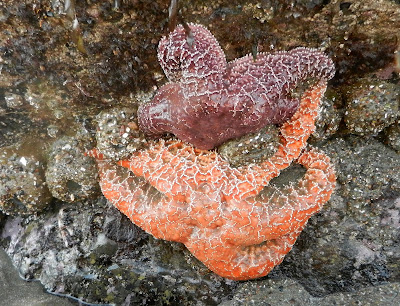 The varied in color and were adorned with short white spines formed into a lacy pattern. 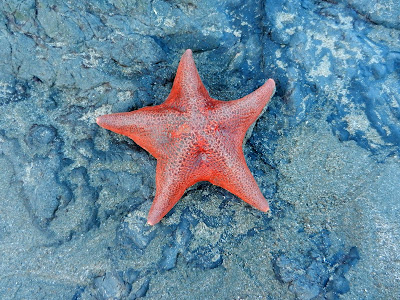 We found a few Bat Stars (Patiria miniata) as well. They were bright red and had no spines.

This one below was one we were unsure of. It seemed to be too small for a Sunflower Star (Pycnopodia helianthoides) but it had the correct shape and it looked ever so delicate. 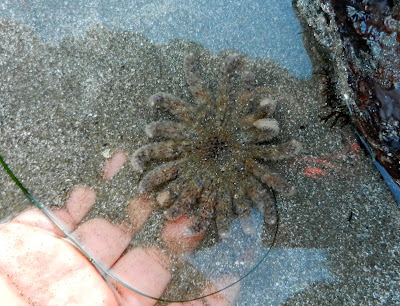 As we were leaving I found a Knobby Sea Star (Pisaster giganteus). The other common name might be Giant Spined Sea Star, I had conflicting resources. 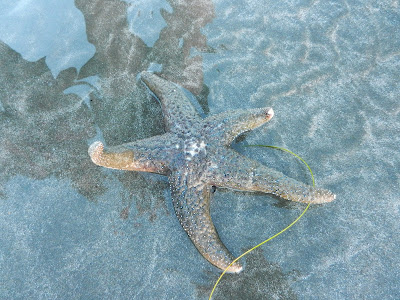 Here is a close up of the spines of Piaster giganteus. 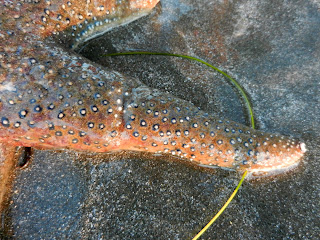 California Mussel (Mythilus californianus), a favorite meal of Ochre Sea Stars have the ability to detect sea star’s scent and close up before being gobbled up. 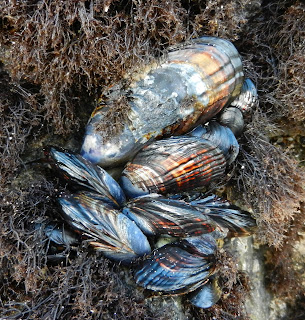 Nestled with them were other shells such as acorn barnacles like this Little Pink Barnacle (Balanus Amphitrite), below. 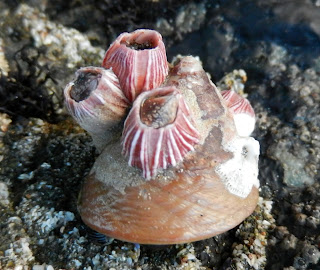 Here is a group of Purple Dwarf Olive (Plivella biblicata) mixed in with some Black Turban Snails (Tegula funebralis) and a couple others that I haven’t indentified. 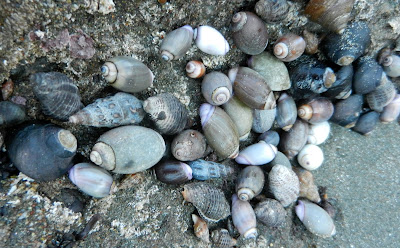 I found this Leaf Barnacle (Pollicipes polymerus) very interesting. It reminded me of a dog stink horn fungus. 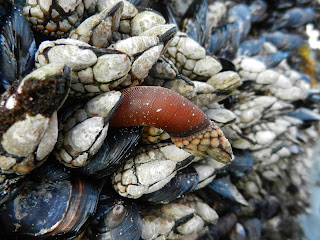 These little Sand Castle Worms (Phragmatopoma californica) were easy to over look and I am thankful they were pointed out to me. There must have been hundreds of them packed in together forming this honey-combed complex. They glue the sand grains together with their mucus. 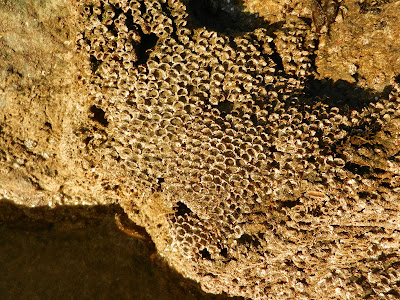 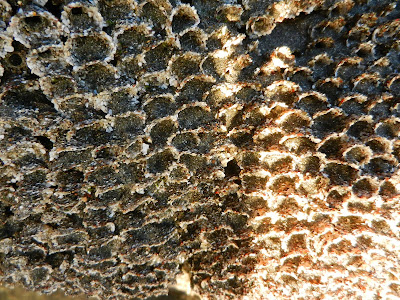 I only made note of two chitons both very different from one another. The small one was a Lined Chiton (Tonicella lineate) you can see below. 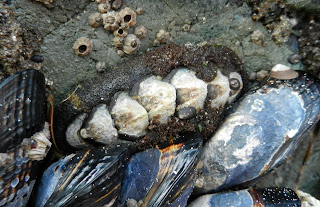 The other one was a Gumboot Chiton (Cryptochiton stelleri) noted to be the largest chiton in the world. It is a brick-red color and about 13 inches long. Here is one that we picked up and you can see how large this one is. 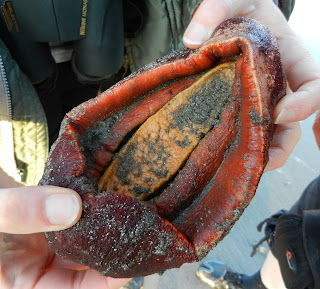 Here are a couple of bat stars along with an overturned Gumboot. You can see its mouth at the left end. 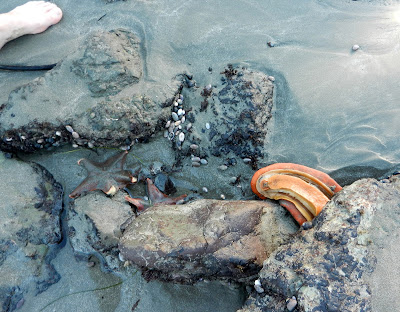 And here are a couple in route to who knows where. 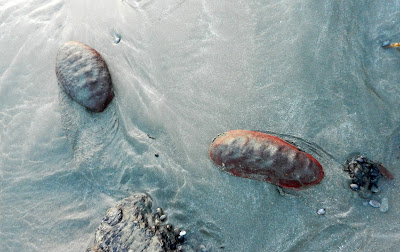 The day wouldn’t be complete without seeing something breeding and sure enough these two Kelp Crabs (Pugettia produccta) filled the bill. The female produces young every 30 days and may carry 61,000 developing eggs at a time. Whew! 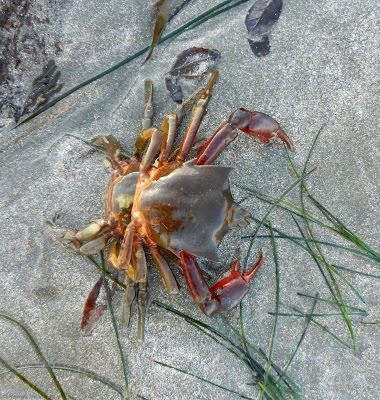 The sun was setting and our feet were frozen stumps so reluctantly I had to leave. I am already planning my next trip to the shore. 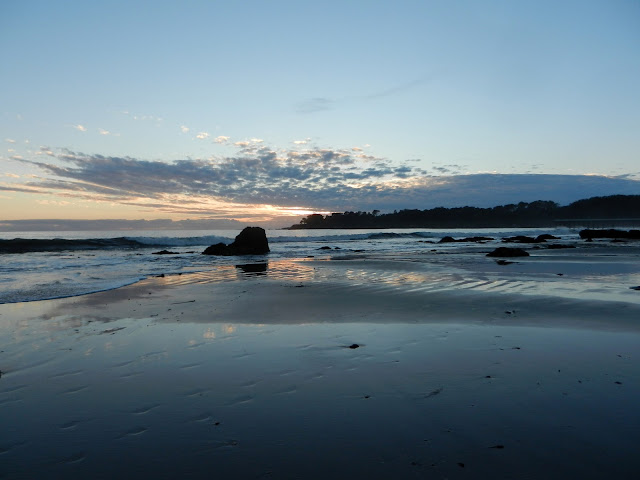 How were you able to tear yourself away from that fabulous place? What a goldmine of fascinating creatures. I'd probably still be there, frozen feet and all.

Ooh, what a treasure trove! So much fun to explore this marvelous place through your blog. Thank you!

You put together a very illuminating summary of what we saw! Thanks!