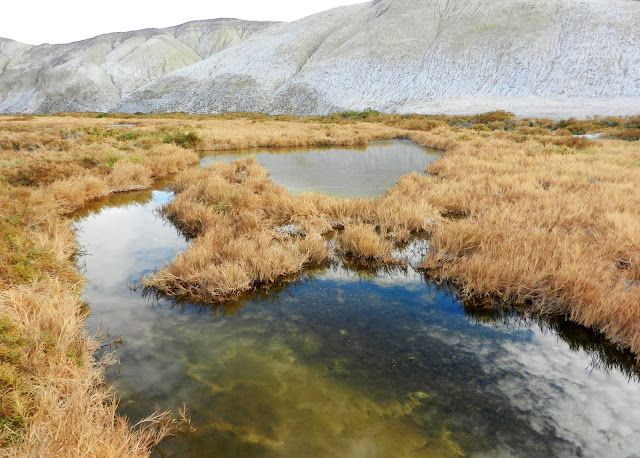 I asked the Park Ranger where was the best place to see wildlife and he said Salt Creek Marsh in the evening but the cold might affect how much I saw.  So off I went while I could still find it in the daylight. The main thing to look for were Pupfish but the ranger said it was too early for them to mate so I probably wouldn’t see any.  I have no idea where they would be in the mean time, if not somewhere in the stream but he was right I didn’t see any. 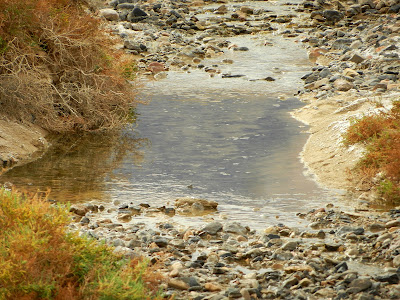 The board walk made a loop that the sights were beautiful at every turn. More than 10,000 years ago this stream and others like it flowed into a huge freshwater lake that filled the bottom of Death Valley, into a lake we now call Lake Manly. As the climate became more arid over time, the Ice Age lakes and rivers dried up to what I was seeing on my walk. 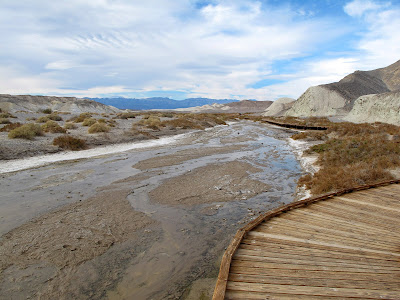 The dominant plant was Pickleweed (Salicornia rubra) and it was everywhere around the stream. It is one of the most salt-tolerant species in the U.S. and can endure up to 6% salinity.  I couldn’t find out why parts of the plants are red and other parts are green. UPDATE: a friend from work, Olivia wrote that the red part is the mature section and the green is the immature.  Check out her blog: Beasts in a Polulous City, it will make you laugh for sure. 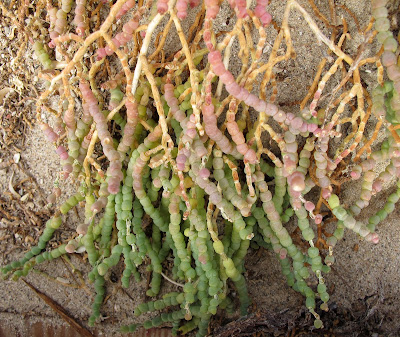 Look at these tracks I found along the side of the board walk. Probably an insect track but I have no idea what. When I looked at this photo I noticed that the Pickleweed look like a bracelet of trade beads. 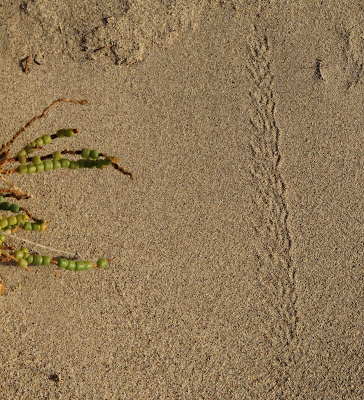 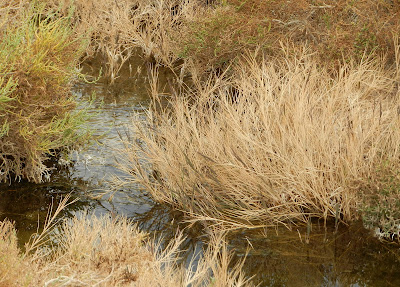 Salt Grasss
I did see some scat on the boardwalk, probably Kit Fox scat and there was a ferocious ant guarding it. 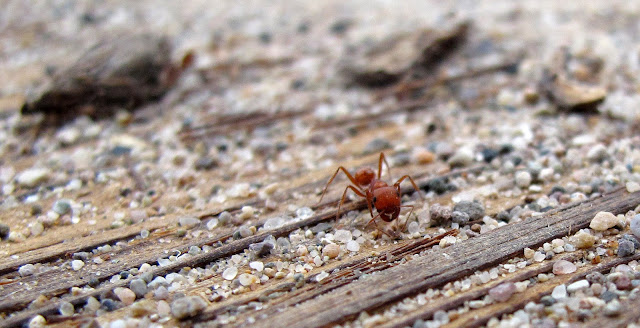 When I came to the top of the look there was a trail heading out into the desert so of course I took it.  I was determined to see fish. 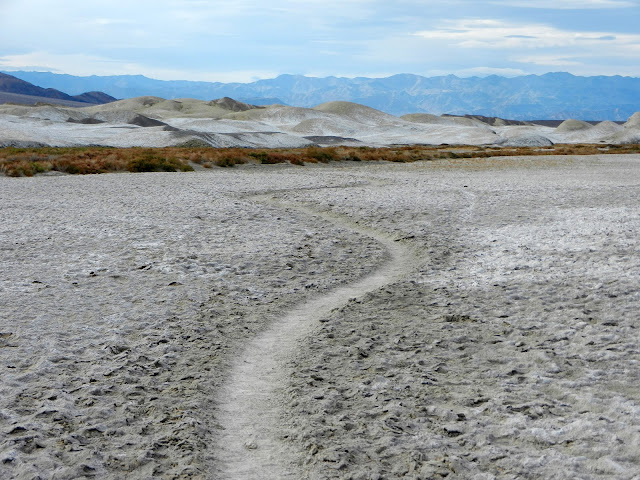 The views out there were amazing. 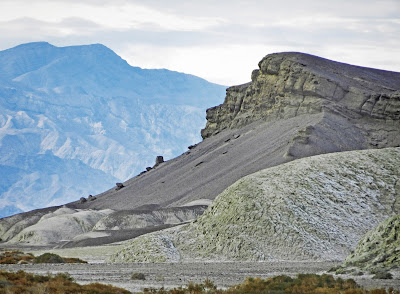 It was mostly sand covered with a thin layer of salt.  Here is a chunk that I picked up. 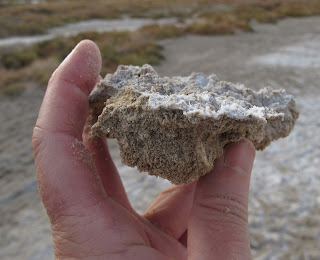 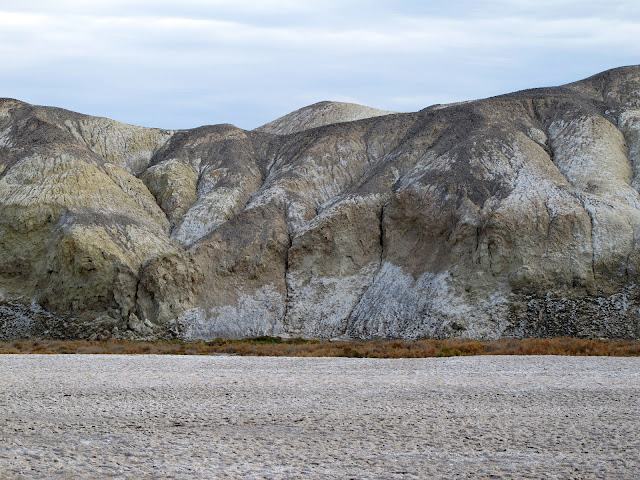 Back on the board on the walk along the edge I began to see movement. 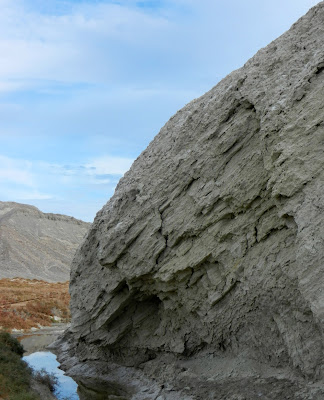 In the creek there was a Hermit Thrush working its way up and down the water’s edge looking for insects.

The other bird that kept eluding me was a Says Phoebe. They primarily eat insects like other flycatchers but they will also eat other foods, such as berries, during long spells of cold or when insects are unavailable. This one was darting out to catch insects. 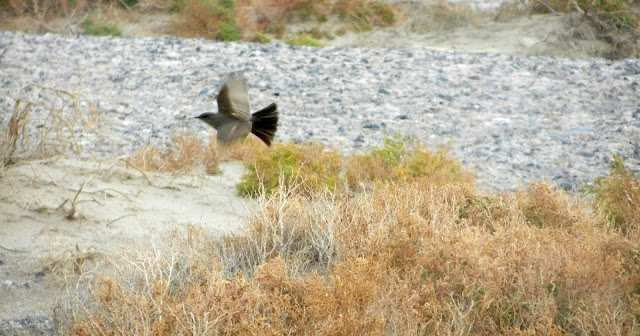 Finally it stood still long enough for me to aim the camera but no focus. Still it was a nice site.

The sun was beginning to set as I was growing colder so I left and called it a day. 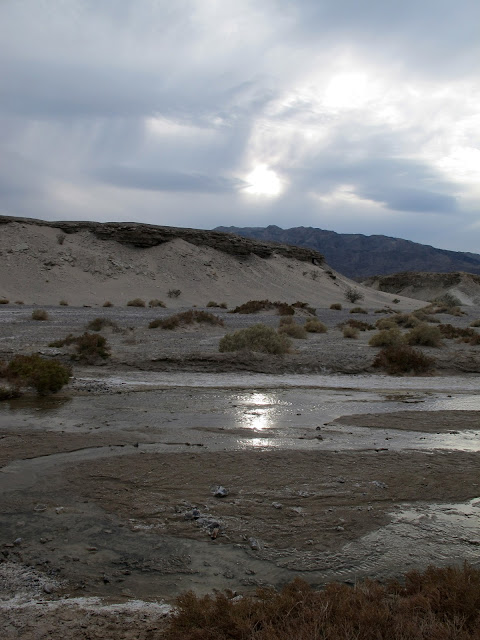 Stunning photos! And I knew nothing about pickleweed until now! (Incidentally, I did some internet tooling-around and it seems the stems turn red when they mature; otherwise, they're green. Why the variation in color, though, within a plant? Curious.)

Olivia thanks so much for the new informaton. You would think that now I am not working I would have more time for research but that doesn't seem to be the case. Your imput is always valuable.

Stunning pix. A photographers paradise! Even on an overcast day. It looked soothingly quiet and isolated.