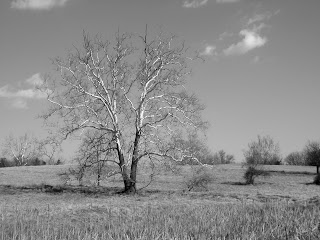 February is one of the dreariest months in West Virginia. The hills are brown; the air is cold, not chilly but Cold with a capital “C”. It is a time I usually stay indoors, watch old movies and drink hot tea. But Saturday the 9th was an exception. The temperature was up to 59 degrees and the sky was clear. I packed up my camera with my new wide angle lens and headed off to Altona Marsh just outside of Charles Town. I have been there many times birding and looking for insects, but today I was just going to take photos.

Altona Marsh is unique for many reasons, but the most obvious is that a train track bisects one side. This track forms the trail that most area birders are familiar with. A quarter of the way down the track I came to my favorite tree, a lone tree in the middle of a pasture that I have photographed throughout the seasons. Today it was spectacular and I couldn’t get enough photos of it. The scientific name is Platanus occidentalis, but we call it the Sycamore.

A sycamore tree is easily recognized by its limbs that look like they are in the process of being repainted. The old bark is flaking off like old paint on many of the abandoned farm homes in the area. It flakes off in great irregular masses, leaving the surface mottled, and greenish-white, gray and brown. The explanation is found in the rigid texture of the bark tissue, which lacks the elasticity common to the bark of other trees, so it is incapable of stretching to accommodate the growth of the wood underneath and the tree sloughs it off, like a snake shedding its’ skin.

Sycamores favor stream banks so it is not surprising to find this one at the marsh edge. You can almost find a stream in the hills by first looking for the white tops of the Sycamores. They follow the shoreline and give a good indication of the path the stream takes.

This particular sycamore looks like two trees joined at the base giving it a vee shape. It’s a common look and makes for a very large trunk at the base. The trunks of large trees are often hollow and can be good hiding places. I have seen them with half of the trunk cut open to reveal the hollow insides. Somehow they keep on growing. In fact, the world’s largest Sycamore stump, 57 feet in circumference and 12 feet high, can be found in Kokomo, Indiana. It was nearly 800 years old when a storm broke it down. The stump survived and for several years, a telephone booth, large enough to accommodate more than a dozen people at a time, was housed inside it. I think the tree before me is housing an old bird nest and probably lots of insects, but we have no need for a telephone booth in this marsh. The silence and the warm sun on my shoulders, as I head back down the track, is enough on this clear day in February.

Nice journal entry! I love Altona Marsh too. Have only been there once but would love to go again. Your link from PVNWG seems to be working fine! Your blog design looks great!

And I always thought those were birch trees...thank you for always teaching me something in ways that are special. Glad you started this; please add me to your postings. Mother said she really enjoyed it too. love, Elizabeth