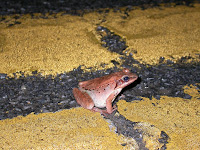 The season was early spring, the ground was wet, the air warm. It was a perfect night for frog courtin’ so I grabbed my camera and fancy new light to wear on my head and drove up to the Blue Ridge Tract where I had seen frogs before. Sure enough, as I approached the parking lot I could already see Wood Frogs (Rana sylvatica) bounding across the road, about two frogs a minute. I think it took them about 5-10 hops to cross, but they were risky hops, life and death hops. I was witnessing their annual trip to a vernal pool where they party through the night in an event called explosive breeding. 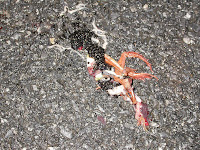 I parked the car and quickly jumped out to help some cross the road to the pool. As I helped them, I wanted to hold up a sign that said, “SLOW DOWN FROGS CROSSING! DETOUR!” but the cars kept coming. It is a wonder that any survived. By ten o’clock at night there, about twenty frogs that didn’t make it lay dead on the road with their eggs scattered around their shattered, fragile bodies.

I imagined them rushing to mate with the promise of a good meal afterwards to refill their bellies after a winters’ hibernation. When I picked them up I felt their recently thawed cool bodies, soft and slippery like a squishy baby toy. One of the unusual things about Wood Frogs is that they can survive multiple freeze and thaw events during winter giving them the nickname of frogsicle. When it touches an ice crystal a signal is set off inside the frog that pulls water away from the middle of its body so that the frog’s organs are now wrapped in a pool of water that then turns to solid ice. They stop breathing, there is no kidney function and their heart stops. Call 911! ... Not to worry. It is made possible by specialized proteins and glucose, which prevent intracellular freezing and dehydration which works like an anti-freeze. It’s harder for the water to freeze so the cells stay just damp enough for the frog to hold itself together. After a week (or sometimes months) suddenly there is a pulse. In about 10 hours the Wood Frog literally comes back to life with its insides warming up before his outsides. It is still a mystery how it all works. 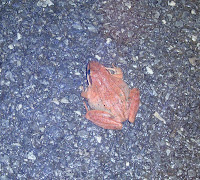 As I took photos I could hear the sound of the males calling the females, like quacking ducks, a call not easily forgotten once heard. When the females arrive and the party begins, the male’s strategy is to actively search for females however, they can’t tell the difference between the sexes by sight. So they embrace any frog nearby and release those that are not fat with eggs. If a male is grabbed by mistake he lets out a loud croak and the intruder hops off. If a female who has already laid her eggs is grabbed, she will be let go because she is no longer fat. Up close I saw how the female’s bellies spread out to their sides, full of eggs ready to deposit into the pool. I could see shadows of the eggs through their thin skin. 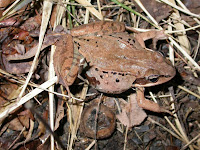 Vernal pools are chosen for their eggs to avoid predators like fish and turtles that might be in permanent bodies of water. The females lay a globular egg mass in the deepest part of the pool. Each glob can contain from 1000 to 3000 eggs and is either attached to a twig or grass or in some cases free standing. In about a week, the masses flatten out and rest on the surface of the water. Often the jelly-like substance surrounding the eggs becomes green with algae. The eggs in the center, from the first pairs to breed, have an advantage of absorbed heat to develop faster than those on the edges, so they get an early start before the pools dry up as spring ends.

Wonderful post and photos! Thanks!
The salamander link you sent didn't work--just went to the main shutterfly site. Can you send again or post?

Nevermind! I found your photo link on your blog. I'm going to join Shutterfly too. What wonderful photos of salamanders!

Thanks for a great blog. I enjoy the pictures and explantions.

Your welcome. I hope you visit again.