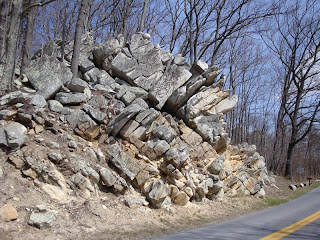 Recently I attended a geology class at Cacapon State Park where I purchased a nice booklet called The Geology of Cacapon Resort and Lost River State Parks by Ken Ashton. The next day, with booklet in hand and new information in my head, I set off to find the examples of the formations and fossils I had just learned about. The trees had not leafed out, making it the perfect time to look because there is very little vegetation covering the rocks, and these bare bones of our mountains are exposed.

The park is in the Ridge and Valley Province that was formed at the end of the Paleozoic Era by the horizontal pressure on the layers of sediment. All of the rocks in this area are sedimentary and it took 300 million years to create, fold and uplift them to their current form. Originally West Virginia was part of a great ocean and, over time, loose sand became sandstone, mud compacted to form shale and calcareous shells became limestone. Evidence of the uplifting and folding is all around. At the park entrance, I found a large block of sandstone from the Mantango Formation, a part of the Devonian system. It was jutting from the ground and I could see how it tilted as a result of the folding.

Proceeding up the road, I would eventually cross the Marcellus Formation and then head into the Oriskany Sandstone area of the park. You can’t miss it. The large, white outcrop on the right is accompanied by a sign explaining its value to West Virginia. 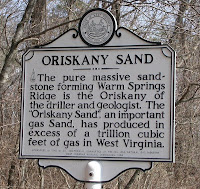 As I looked at the outcrop and the beach along the lake behind me, I began to understand how this was once the bottom of an ocean.

Continuing toward the lodge, I would soon cross into the Silurian System made up of the Bloomsburg Formation, McKenzie Formation, Keefer Sandstone, and the Rose Hill Formation finally arriving at the reservoir. But first I made a side trip up to the bath-house wall to see the Arthrophycus alleghaniensi fossils. They are trace fossils of trails and feeding tubes of unknown ancient organisms. It was like looking at an ancient bucket of worms that I could touch without feeling them squiggle. 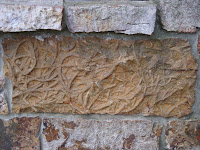 I also found another worm fossil called Scolithus keeferi in one of the boulders down by the Oriskany outcrop. They look like white pebbles but they are quartz-filled fossil worm burrows, extending down into the sandstone. Exploring the boulders at the edge of the parking lot I found some shell fossils, similar to those I saw in the Keefer Sandstone, used to build the chimney at the old Cacapon Park Inn. I believe they were called brachiopods. 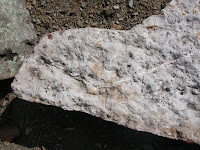 I enjoyed my afternoon exploring the large rocks for treasures hidden in plain site. Within the park, there are many more traces of ancient times to find, but I left those for another day of geological exploration.

The photos were all taken by me. You can find more photos from my trip at: http://adventuresinnature.shutterfly.com/
Posted by squirrel at 8:27 AM