What is this bug? 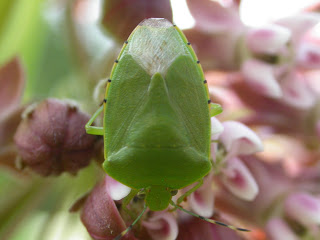 Saturday, March 14, I was participating in a nature walk with a class at the National Conservation Training Center when my friend, Ellen, showed me a stink bug that she had found. I was surprised to see it because of the cold weather. After over wintering, adult females look for host plants in early spring to deposit their eggs and I guess this one was getting an early start. They can be found along field borders, particularly along tree lines near their over wintering sites. Ellen brought it to me, thinking I might know the name, since I am interested in insects. Fortunately for me it was a (Acrosternum hilare), I knew by the common name of Green Stink Bug. So many times, with stink bugs, I am clueless.

The shield like shape (five cornered) was my first clue that it was a stink bug. The second was the way the two pair of wings crossover its back forming an “X”, a characteristic of the Order Hemiptera. Stink bugs are true bugs belonging to the family Pentatomidae from the Greek "pente" (five) plus "tomos" (a section); a reference to the 5-segmented antennae. 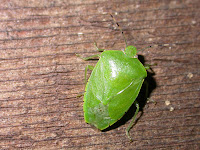 They certainly deserve the common name stink bug because if you kill one, the smell is unmistakable. When I have pinned them for my collection, the smell makes me nauseous and lingers on for days. It discharges a smelly substance from two large glands on the bug’s thorax. Many predators spit out stink bugs right after biting into them, so it must work as a good defense. 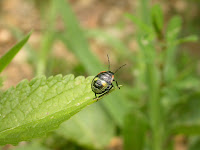 Ellen let it go but I picked it up again because there was just so much more to see and learn. I had a moment to show someone else how cool insects were and didn’t want to let it pass. I rolled it over onto its back and it patiently laid there while I tried to point out the beak, which I wrongly called a stylus. The correct term is rostrum. They don’t have chewing mouthparts, but they do have a hypodermic-needle-like mouth with four thin, sharp needles in it. They pierce developing seeds, buds, stems and foliage to suck up the juice from plants. When not eating, green stink bugs hold their rostrum underneath their bodies between their front legs and this is what I was trying to point to. The next time I see one I am going to try to watch it feed, follow it around and see what it is up to. Should be fun.

The photos were all taken by me last year and the one on the bottom is a Green Stink Bug nymph. You can find more of my stink bug photos at: http://adventuresinnature.shutterfly.com/
Posted by squirrel at 8:29 AM