My trip into the West Virginia woodlands on April 18 yielded a good variety of interesting things. The first three, pictured below, were found at Sleepy Creek Wildlife Management area and the last two were found in my own back yard. I’m sure there is a lesson in there somewhere. At first, I thought that the photos alone would be enough, hence the 1000 words title, but then I realized that observation is really the key to understanding wildlife. I have gleaned the internet and found the following interesting facts about each species that others have observed. My photos are my best offering until I develop the patience for such detailed observations. Enjoy and I hope you are inspired to look for these behaviors when you see these flies, butterflies, newts, frogs and flowers. Click on each photo for a larger view. 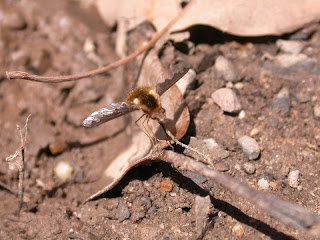 The Bombyliidae (bee flies) eggs are laid near the entrance to the nest of the specific bee host parasitized by that species of bee fly. The tiny larvae enter the nest and usually wait until the bee larva has pupated before metamorphosing from a small, mobile animal to a smooth, fat larva which feeds on the bee pupa. The bee fly pupa is dual-phased. The first pupa is ‘normal’; the second stage has a sharp battering ram with which to break down the nest cell wall, made by the adult bee when closing the cell. 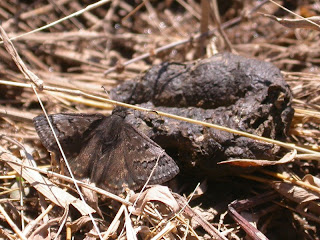 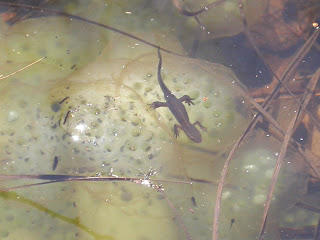 Eastern Red Spotted Newt (Notophthalmus viridescens) During the breeding season, males can be easily identified by their enlarged hind legs, with black-horny structures on the inner surfaces of their thighs and toe tips (used for gripping females during mating), swollen vents, and broadly keeled (high-wavy crest) tails. 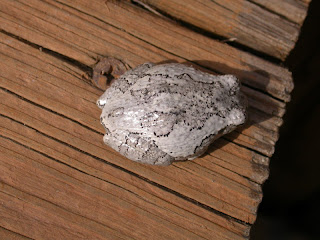 Gray Tree Frog (Hyla versicolor). As the species name Hyla versicolor implies, gray tree frogs are highly variable in color owing to their ability to camouflage themselves from gray to green, depending on the substrate they are sitting on. The degree of mottling varies. They can change from nearly black to nearly white. They change colors more slowly than a chameleon. Field Pussytoes (Antennaria neglecta). Some authorities state that this is primarily a wind-pollinated plant, while others emphasize the role of insects in promoting cross-pollination. Primarily small bees and flies visit the flowers, including Halictid bees, Andrenid bees, Cuckoo bees, Syrphid flies, Muscid flies, and Blow flies (Robertson, 1929). The caterpillars of the butterfly Vanessa virginiensis (American Painted Lady) feed on the foliage.
Posted by squirrel at 3:10 PM

Phenomenal photos, Squirrel! Thanks for smartening me up with amazing nature facts too!