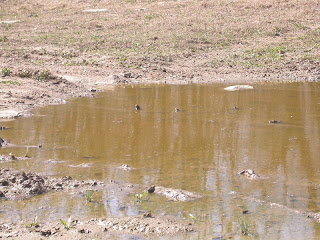 Following my own advice from a previous blog, I decided to spend some time observing nature. Not looking for and identifying species, only to move on, but real observation. I chose a small vernal pool about the size of my car that was less than a foot deep in the very center. I liked this pool because I could sit in my car unobserved. I told myself it was like a duck blind, in truth, it was just more comfortable. I could eat the snack I brought along and be out of the blazing hot sun. 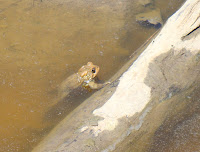 This little pool was brick red with cloudy water, and located in the middle of a large field. I’ve seen earth moving equipment parked in here at other times. I’m not sure why these five little frogs chose this unlikely spot, but there they were nonetheless, one big fat female and four little males. In previous years I have found eggs in the small pools of this field, but never adult frogs during the middle of the day. Timing is everything for good observation. I lucked out today. 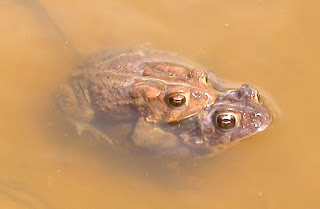 I was surprised to see them. Everyone knows frogs call in the evening after it gets dark to avoid predators. Yet, here they were sitting out in full daylight in this ninety degree heat. One was caked with dried mud. The female was supporting a male on her back, in a breeding posture called amplexis. The male grasps the female around the neck with his front legs and hangs on. He waits for the female (I called her “Big Mama)”, to lay her eggs. As the eggs emerge he releases sperm to fertilize them in a process called external fertilization, common to amphibians. Sometimes as many as 7,000 eggs are fertilized. The water was so cloudy I couldn’t even imagine his sperm finding Big Mama’s eggs, but this was their choice and they were going to breed here no matter what. I did make out a string of eggs attached to the pair. I watched one of the other males come up behind the couple, perhaps to join in the fun, but Big Mama sunk into the water. She wasn’t going to support another horny toad today even if she was the only gal in the pool. 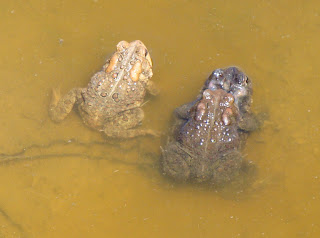 When I first drove into the meadow I had heard frogs calling and this was what I wanted to see first hand. But these three males just sat still and didn’t move. This observation stuff was proving to be a long, drawn-out affair, so I began to read and learned that these Fowler’s Toads, Bufo fowleri, have enlarged glands (called the paratoid glands) on the side of the neck, one behind each eye. These glands secrete a viscous white poison that gets smeared in the mouth of any would-be predator, inflaming the mouth and throat and causing nausea, irregular heartbeat, and, in extreme cases, death. Well, so much for kissing these toads. Periodically I would check to see if anyone moved. Nada. Everyone was still at their stations. 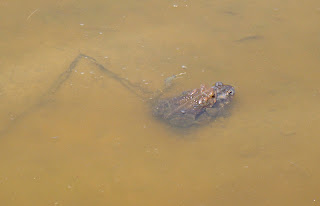 Whoa! What happened? They all ducked under the muddy water. I looked around and didn’t see anything until my eye caught the site of two Ospreys flying overhead. One called “yewk, yewk” as they left the area. Now, this was getting interesting because earlier I had walked around the pool taking photos from all angles and stretching my arm out over the water for a close up and no one moved, but of hawks caused them to duck for cover. Maybe they heard the hawks call before I did. In any case they weren’t offering their legs up as hawk appetizers. Soon they popped back up and retained their frozen posture. I imagined them playing “statue” as I did with childhood playmates. The first one to be spotted moving became “it” the next time. Only this time I was always “it” and had to catch them moving.

The next time I looked up they were sitting up straight with their chests raised. I thought, “This may be it, they are going the call.” Sure enough one of the throats swelled up like a big, black balloon and I heard the nasal, sheep-like call typical of Fowler’s Toad calls. "W-A-A-A-H-H-H…W-A-A-A-H-H-H" he called, then the other two called and I was witnessing a mini chorus, or in this case a trio. I know I am projecting when I say they looked so hopeful yet very tired. After about three calls each they gave up. Gray tree frogs answered in the background but that was not the response these little guys were looking for. I felt so sorry for them – who knows how long they had been calling and when they would give up. The urge to breed is so fierce. As I drove away I thanked them and wished them luck.
Posted by squirrel at 3:20 PM

Delightful post! I was riveted to every word. An adventure. I like the way you capture how what you are observing affects you. You slipped in the facts so they went down easily!