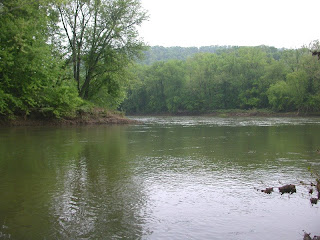 Confluence, isn’t that a grand word. It describes the meeting of two or more bodies of water, the point where a smaller river or tributary joins a larger mainstream river. I recently stopped at the confluence of the Cacapon and Potomac Rivers located near the stream access point at Great Cacapon, West Virginia. Along the path to the river, an unexpected Indigo Bunting sang a melodious greeting. Just around the bend, under the bridge and voila, there it was – the confluence of these two beautiful rivers. The Cacapon, meaning Medicine Waters, and the Potomac named after a tribe that inhabited the upper reaches of the river near Fredericksburg, Maryland. Their names are a reminder that we are never far from our connection to the native people who first lived in these hills and heard the musical notes of the Indigo Bunting as they canoed these waters. Here, the connectedness of all things came to mind. The Cacapon runs to the Potomac, which flows into the Chesapeake Bay, and then out to the Atlantic Ocean. Along the way, the water evaporates and then it returns to the earth as rain, flowing down the hollows and creeks, making their own small confluences, eventually returning to the river. 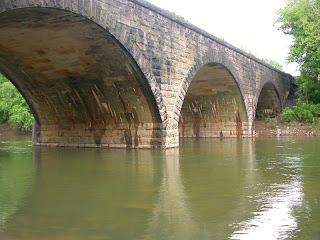 Drowning out the calls of American Toads, a train went roaring along on the bridge overhead. It is now the CSX Line, but once it was the Baltimore and Ohio Railroad (B&O) connecting the east with the new frontier of the west. The C&O Canal on the Maryland side made the same connection by different means. Their confluence was in the Wild West, where the adventurous connected with new opportunities and families made a fresh start. 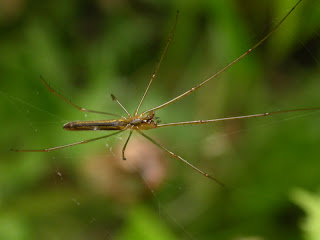 As I left, I took a moment to photograph a spider on its web. It was a visual symbol of the web of life we all share. In my own body, which contains fifty-five percent water, I can imagine tiny confluences through out my arms and legs forming a liquid web.

Confluence, a word to describe a point of connecting … wouldn’t it be grand it we all had a little more confluence in our lives.
Posted by squirrel at 10:36 AM

Email ThisBlogThis!Share to TwitterShare to FacebookShare to Pinterest
Labels: river

I love the way you wove a web like a spider connecting so many different dimensions, nature's cycles, time, space, history, cultures, technology, human/animal, even within and without our bodies! Like a set of those Russian dolls...