Flowers of Roadsides and Fields

Hot days of summer (100 degrees) like we had last weekend do not often draw me outside but I thought if I just stay near the car, an ice chest and AC if needed I would be just fine and dandy. So off I went in search of wildflowers, in particular roadside and field varieties. I drove down off the mountain, into the valley and country side. 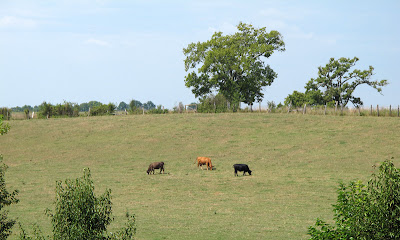 I was looking along the way but my destination was a familiar intersection in the middle of the county with a creek and wetland nearby. It turned out to be a fabulous place because of the variety. 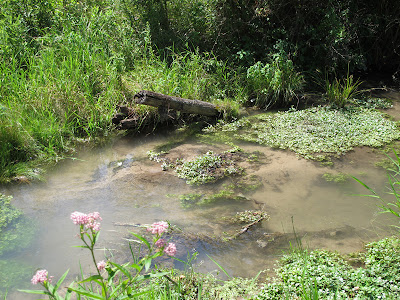 Blue Vervain (Verbena hastate) is one of the flowers that really liked this wet bank along the stream. Like a lot of the flowers I found this one is used for a variety of ailments none of which are approved by the USDA. 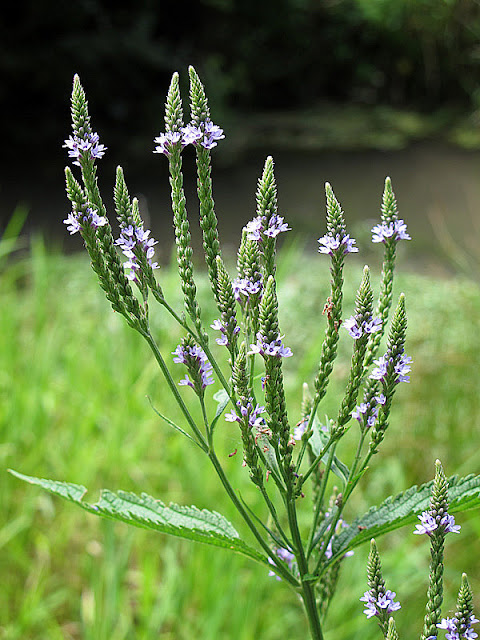 Another moist loving flower is the Swamp Milkweed (Asclepias incarnate). This plant is also a host plant for Monarch Butterflies and looks much nicer in home gardens. 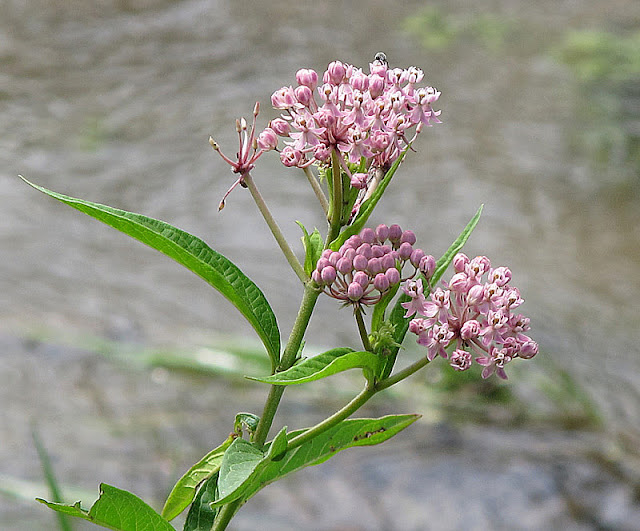 Spearmint (Mentha spicata) is one of the mints that were at this corner and it likes moist soils as well but will tolerate dryer times. I tasted some and it was yummy. 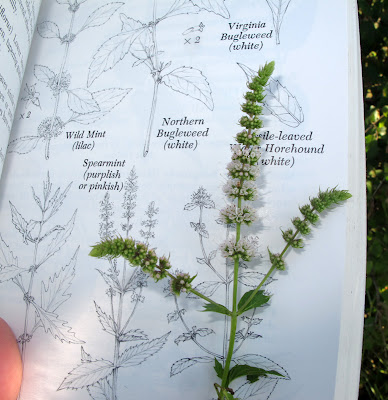 Catnip (Nepta cataria) was also here but it has a much larger and fatter flower head. It is called catmint or catnip because cats just go bonkers for it. If you have a cat I’m sure you know what I mean. Nepetalactone in this plant binds to the cat’s olfactory receptors and puts them in a state of euphoria. 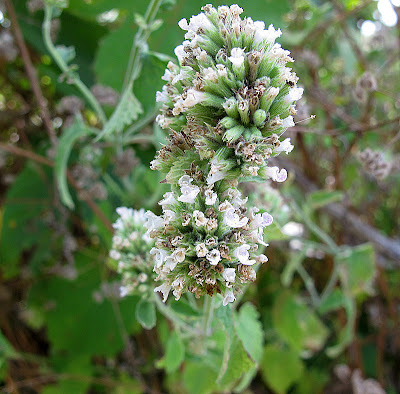 I was in a good location because there wasn’t much traffic and everyone waived as they drove by. I imagine they thought I was a fool to be out in this heat on the black top road. There was one place in the road where the tar was bubbling up but my photo didn’t turn out so I can’t show you. It was just at the bottom of this hill in the middle of the intersection. When I was a kid I used to love to ride by bike through those bubbles and hear them pop. 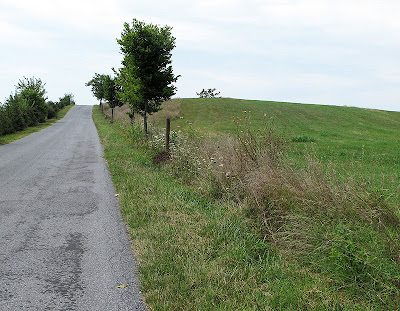 Just along the fence there were lots of Queen Ann’s Lace (Daucus carota) and Chicory (Chichorium intybus). 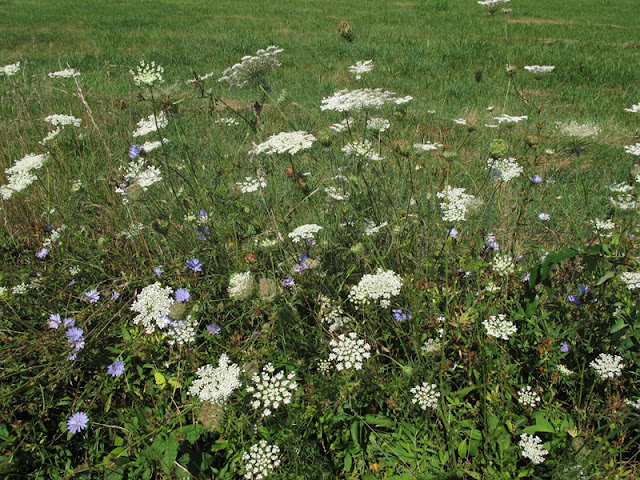 I once had Queen Ann’s Lace fritters and they were OK. They mostly tasted like the batter.

Chicory is one of those flowers that have a million uses but you know I have never tried one. It is one of my favorite flowers and is a sure sign of summer. 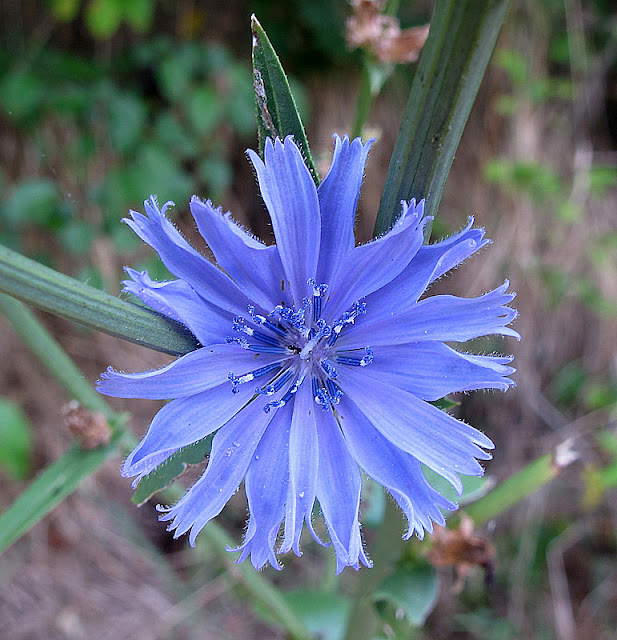 Speaking of food take a look at the Butter-and-eggs (Linaria vulgaris). There is a lot of sweet nectar stored in that long calax. 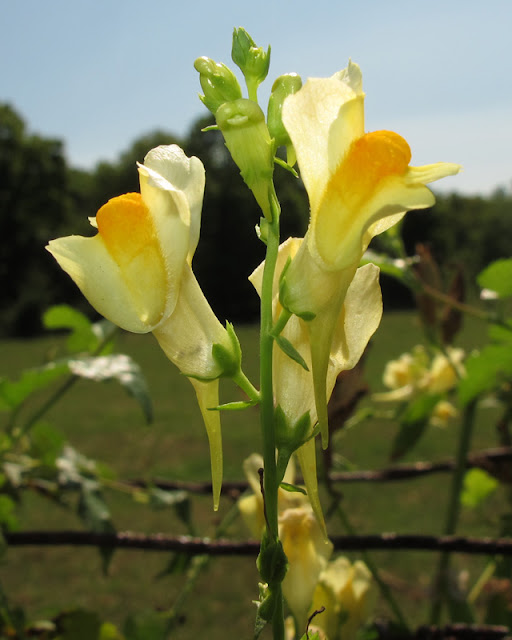 I squeezed one open, like a snapdragon, so I could see the inside where the long tongued bumble bees dare to go. It was fun to make it open up like a mouth and make it talk. 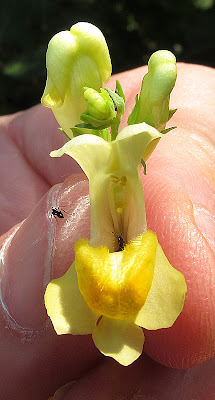 Another flower that is fun to squeeze is Monkey Flower (Mimulus ringens). The common name comes from the fancied resemblance of the flower to a monkey's face when it is squeezed by the fingers. I didn’t know what it was when I took this photo so I didn’t get the monkey face. Sorry. 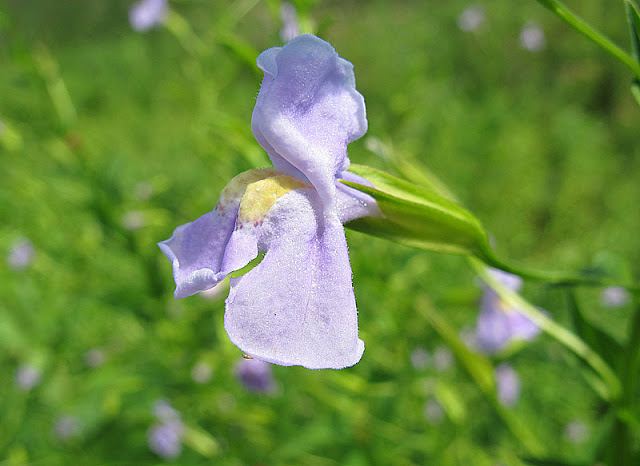 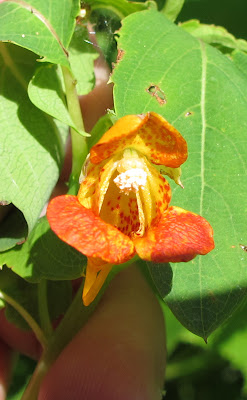 It would talk a long tongued insect to take nectar from this one. They say jewelweed is good to take the sting out of nettles and they usually grow nearby. 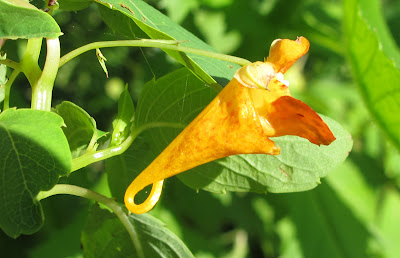 I found this Carolina Horsenettle (Solanum carolinense) but it is not a true nettle, it is a member of the nightshade family. Nevertheless it can cause a bit of pain if one of the spines on the stem pokes into your legs and breaks off. OUCH! 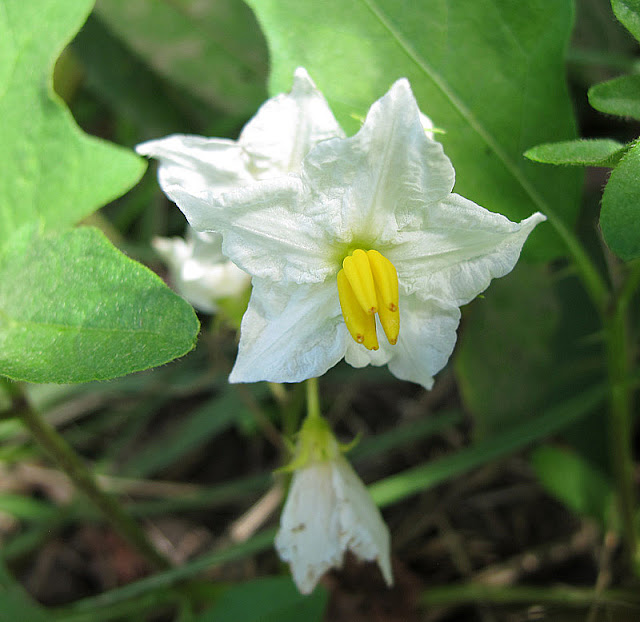 Bittersweet Nightshade (Solanum dulcamara) is a pretty plant but not one you would want in your yard since it can be toxic and invasive. 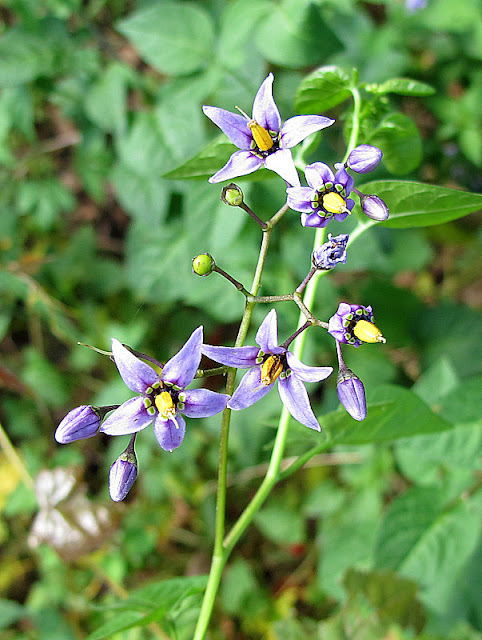 Boneset (Eupatorium perfoliatum) is a rather large plant but it is mostly leaves. They have a wrinkled look. The story is that they were used for bandages for broken bones because the joined leaves gave the idea that the plants would be good for rejoining broken bones. Go figure. 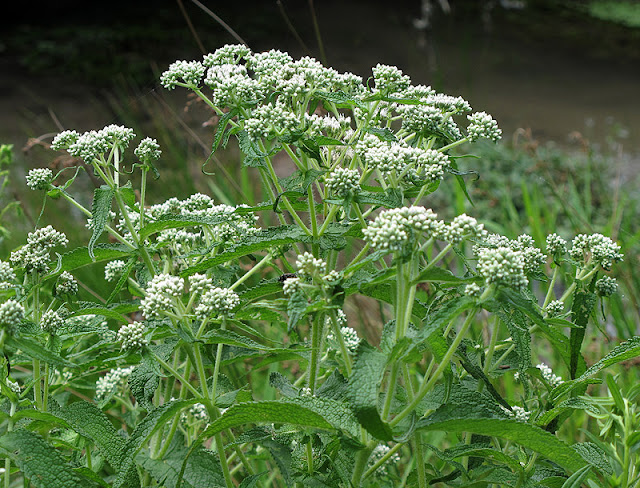 Of course it you were going to do surgery on broken bone you might want to lather up with come crushed Soapwort also called Bouncing Bet (Saponaria officinalis). This location is practically a drugstore! If you crush the plant it is supposed to be good for cleaning. The scientific name Saponaria is from the Latin sapo meaning “soap”. I’m not sure what Bouncing Bet refers to. 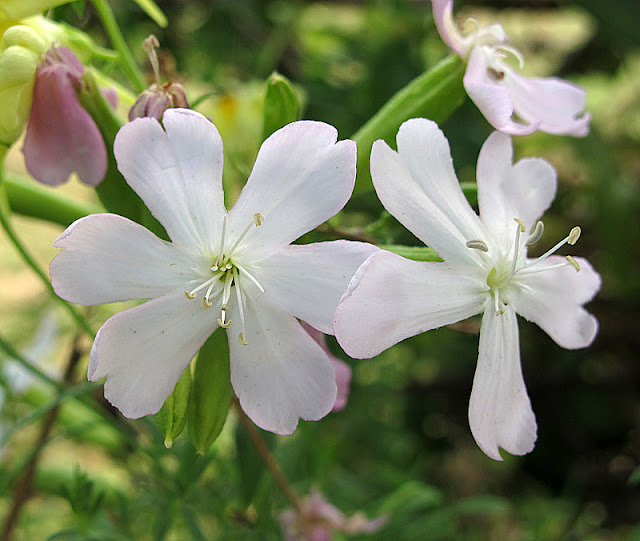 New York Ironweed (Vernonia noveboracensis) was in abundance, especially along the swampy area on the opposite side of the road from the creek. It is really pretty. 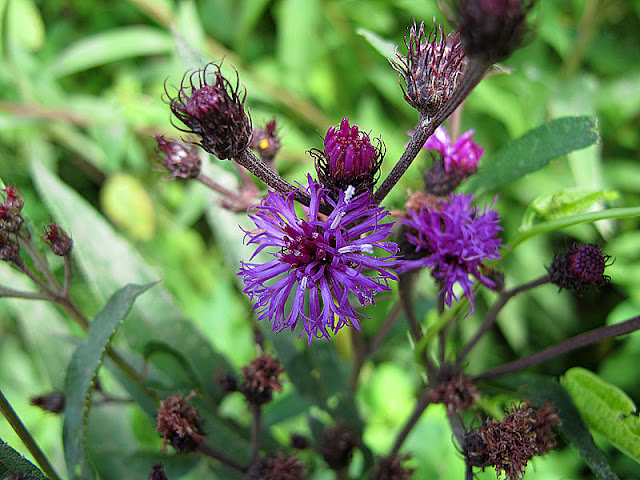 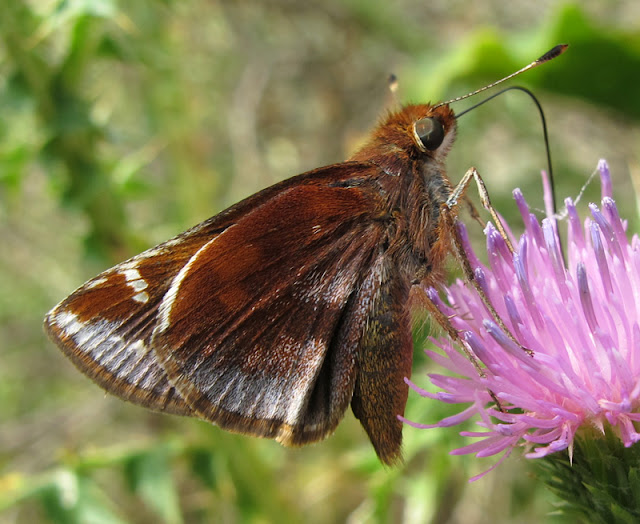 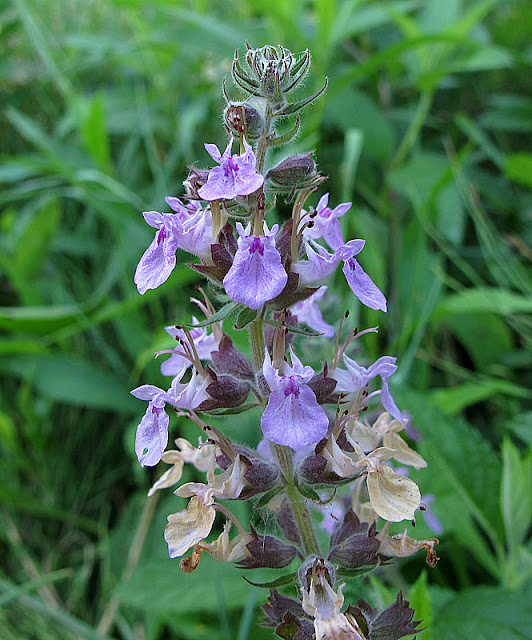 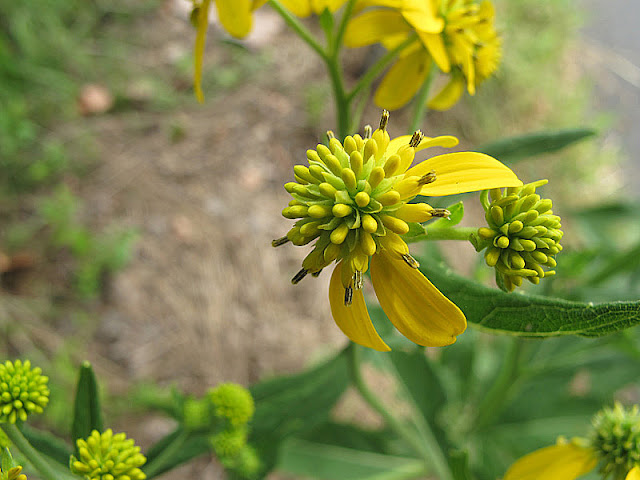 Wingstem (Verbesina alternifolia) is an interesting plant with side wings on the stem as the name suggests. I alway find intersting insects on these.
On my way home I found some Tansy (Tanacetom vulgare) just 4 blocks from my house. It is good to plant in an organic garden to keep insects away, especially the Colorado potato beetle. Wikipedia said that in England it is placed on window sills to repel flies; springs are placed in bed linen to drive away pests, and it had been used as an ant repellent. I think I should get some of this. 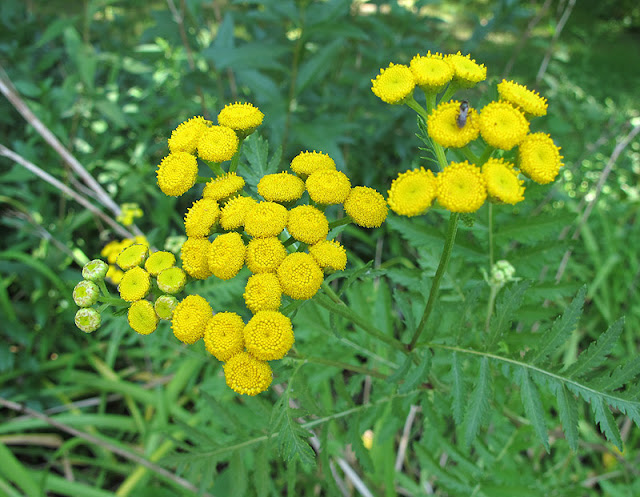 Be sure to visit the Today's Flowers for many more beautiful flowers.
Posted by squirrel at 1:10 PM

What an amazing and fun tour--thanks for taking me along! A lot looked familiar but I was thrilled to see tansy and that stunning blue of chicory.
You live in a beautiful area.

Oh my, thank you for taking us along on your wildflower ride. All fabulous photos and am always glad for the identifications of flowers, as I am still learning hear.

thanks for the hike...through all the flowers! beautiful pictures...and colors!!