Spiders aren’t the only thing I have been seeing lately. When I found the Garden Spider Egg case I also found two interesting caterpillars nearby. The first one is a Hermaris diffinis, commonly called Snowberry Clearwing moth. 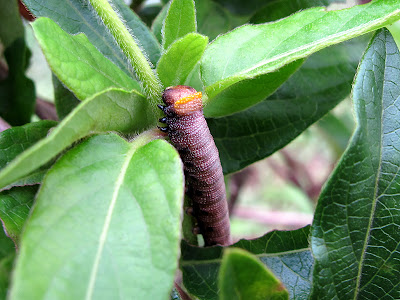 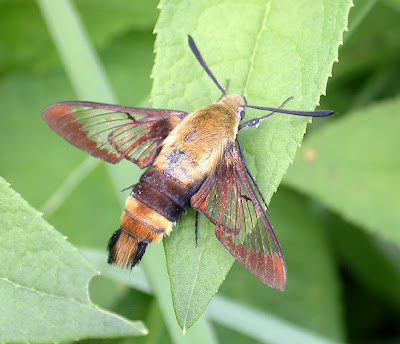 Snowberry Clearwing moth adult
This is the less common brown form and I found it where I had seen adults earlier this year. It likes fields, woodland and forest edges. This one was on a fence row next to a field for cattle. 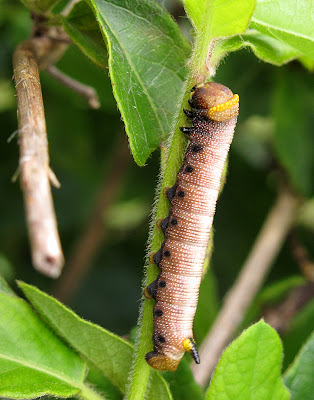 Isn't that horn at the end interesting? I suspect some of it's enemies are taken aback when they see this. I suppose I would be too if I sat down next to someone on the subway with a large horn.

The other one I found was a Eupithecia miserulata known as a Common Pug. The moth is really not much to look at and hard to identify from other Pugs but this caterpillar is pretty darn cool. 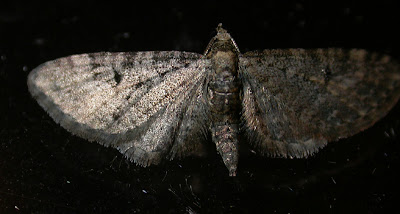 This is the adult Pug found at my porch light in early March.
Wagner in his book Caterpillars of Eastern North America says, “It’s coloration frequently blends with that of its foodplant --how the caterpillars come to match their background in coloration is deserving of study”. Is that amazing or what! It took me a while to find it in the book because mine was a bright yellow to match the yellow flower. Finally I just focused on the herringbone pattern and found it. The one in the book is brown. 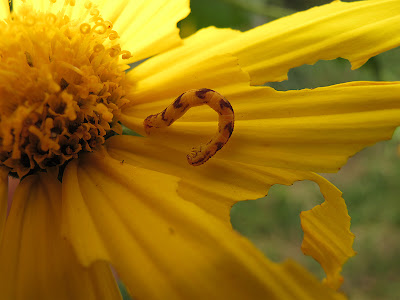 Eupithecia miserulata larva (Common Pug)
You can see how it has been eating the petals of the flower. 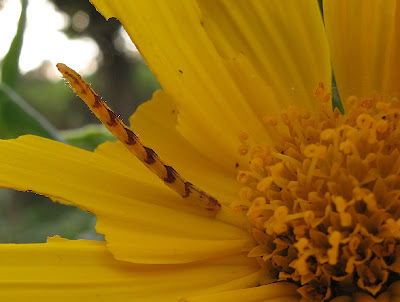 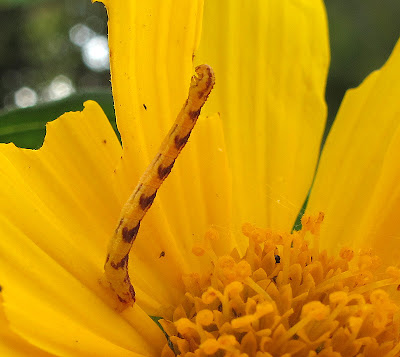 Eupithecia miserulata larva (Common Pug)
When it was first spotted it was near the center of the flower and blended in but as I began to take photos it moved out and eventually took the position of standing up straight and stiff. I guess this normally works to ward off preditors but for me I was gratefull that it finally stood still so I could get a good photo.
Posted by squirrel at 2:21 PM

Thanks for all these wonderful photos and information about caterpillars and spiders. I always learn so much from looking at your posts and take delight from your excellent images.

I have that book too. I got it last summer to help me with the IDs as I am poking around. I have seen hummingbird clearwing moths here and I am trying to plant to attract more butterflies. I can't remember what the clearwing needs for its larva...Michelle

Jackie and Michelle, thanks for visiting and leaving a comment.

Michelle, Teasel and Honeysuckle are host plants but I'm not sure what else. We have tons of the stuff in my area so there is no lack of hosts.

That explains it as we have honeysuckle..I have to get down and really look at things as you do...