Last weekend my friend Jane came up from DC to explore and look for mushrooms. When we started out it began to drizzle rain but we went ahead with our plan. What’s a little rain to stop naturalist! I must admit I was a little concerned for my camera but off we went.

Our first good find was a colony of Clavaria pyxidata, Crown-tipped Coral mushrooms or they could be Ramaria stricta, I just can’t decide. There must have been 30 or more in very large clumps. Roody in Mushrooms of West Virginia writes that they are edible but I’m just not ready to taste these just yet. He claims they taste mild to peppery. I think they are pretty and that’s enough for me. 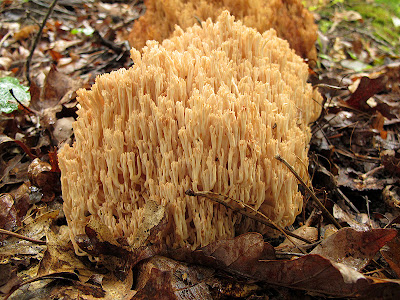 I was thrilled when Jane pointed out these earth stars. I believe they are Geastrum fimbriatum. The rain has made them glossy looking and they almost sparkle don’t they. I asked Jane to squeeze one so I could get a photo of the spores coming out but I didn’t get the photo and she got a face full of spores. I don’t think she will do that again even if I begged. 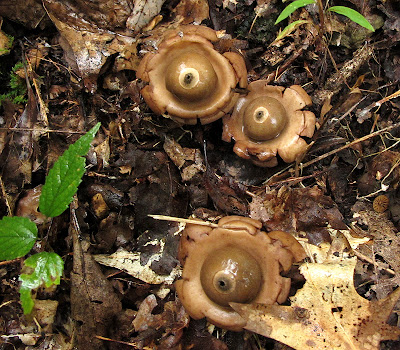 We saw many other mushrooms that we didn’t identify before the rain began to really come down and we had to leave.

Then last Friday after work I drove back up to see if I could find more and I was blessed with these two bright orange ones. I believe they are Hygrocybe cuspidate, Candy-apply Waxy Caps. With that red color you would think they were poisonous but they are not. 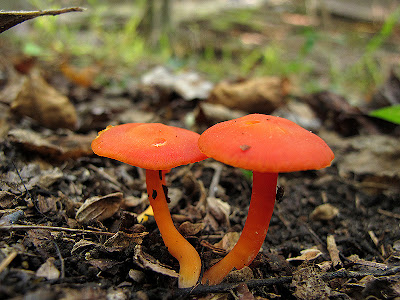 There were plenty of regular shaped mushrooms all about but I was going for the more exotic looking ones such as this Clavulinopsis aurantio-cinnabarina. That’s a mouth full isn’t it? The common name is Orange Spindle Coral. I found some twice the size of this one but I’m showing you this because I have my hand there for scale. They can get up to 5 inches, but I think I only saw some up to 4 inches. At first it seemed like there was only one but once I started looking I could see them all around. 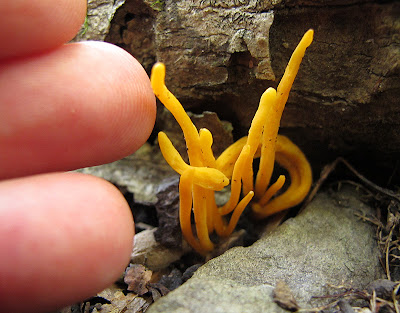 I was also going for the colorful when I photographed these Lemon Drops, Bisporella citrine. They are one of the most common cup fungi in my area. This log was covered with them. 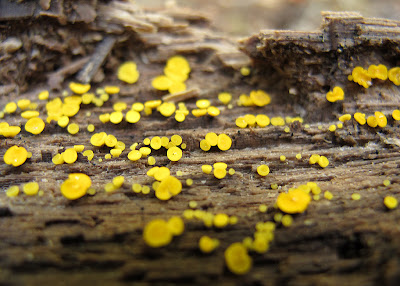 I walked on up the hill to find the earth stars again but found this box turtle instead. He seems to have all the fall colors of the mushrooms in his face. He doesn’t look too happy but I suspect he has inner peace if not a joyful face. 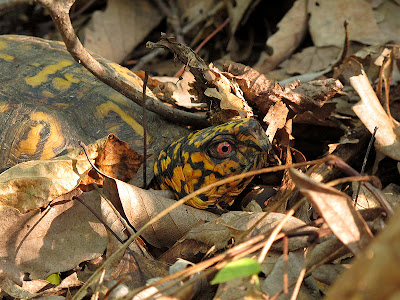 I didn’t find the earth stars but I did find this Pestle-shaped coral, Clavariadelphus pistillaris. If you look closely on the left side you can see the teeth marks of something that ate its way along. I think it was a tiny snail. 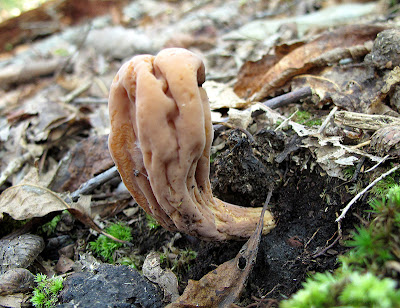 As I was getting back into my car I saw some movement and followed a chipmunk to its hideout. I guess it thought I couldn’t see it and was very still and watchful. I was rather surprised because there are so many squirrels about that I rarely see a chipmunk at this end of the mountain. 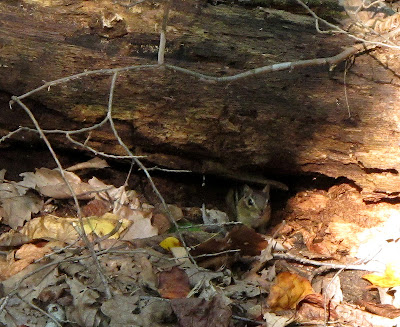 It was getting late so I took this parting shot before I drove home. It was truly a perfect and colorful day. 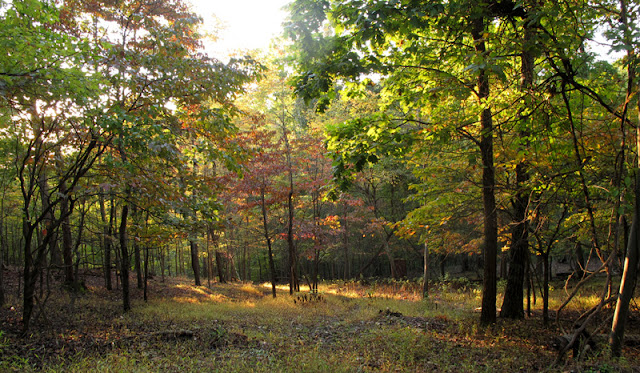 There is just no end to the marvelous variety of mushrooms. Thanks for sharing your finds. I loved that last shot of the lovely fall woods,too.

i LoVE to look at mushrooms!! i LoVE turtles!! earth stars are amazing! i love the woods...and autumn...and this post is ALL of this!! BEAUTIFUL pictures!!

I have never seen so many different kinds and colors of mushrooms! The photo of the chipmunk is delightful! They are such cute creatures. Gorgeous photos!
Cindy

You have a really cool blog --- just found you through Wordless Wednesday, and now, have spent time looking at some of your other posts.

Very nice -- and I'm looking forward to seeing what's next!