Monahans Sandhills State Park consists of 3,840 acres of sand dunes, some up to 70 feet high. It is about a half-hour's drive west of Odessa where I first started smelling gas.  I pulled in just in time to find a camp site before dark. 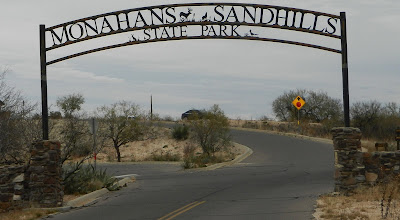 I drove around until I found a spot near the end that was away from the other campers so it seemed as though I had the place to myself.  When I later talked with my aunt I learned that she and my uncle camped in the same spot.  After his death some of his ashes were scattered there per his request. It was a favorite spot of his and quickly became one for me as well. 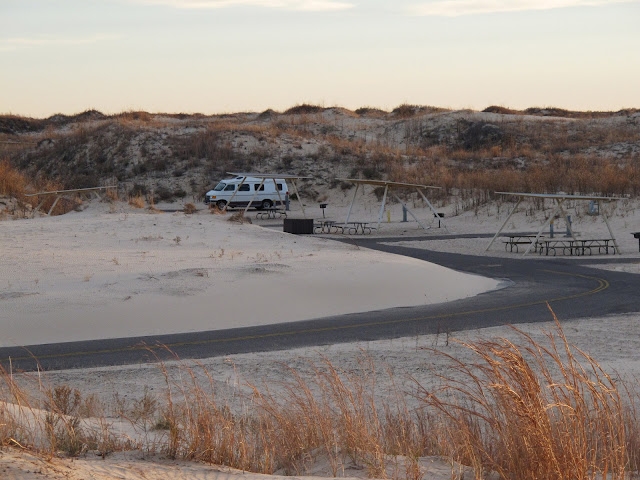 The sun was setting quickly but I did manage to take a short walk and snap a few photos. 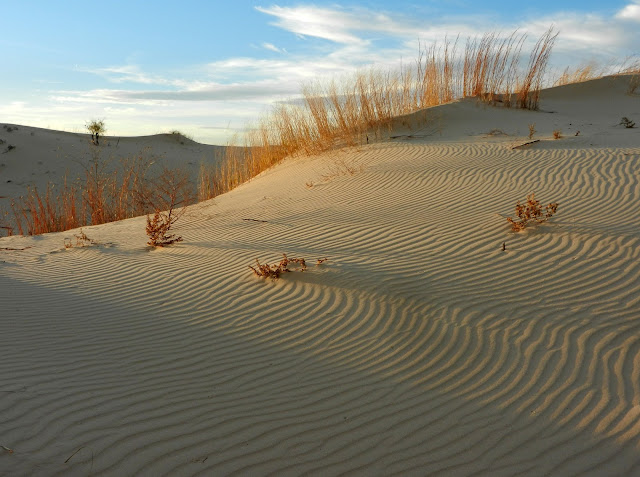 I loved the way the setting sun cast shadows on the ripples in the sand. More than 400 years ago, Spanish explorers were the first Europeans to record their discovery of these sand dunes.  The sand you see here came from the Pecos River and the New Mexico Rocky Mountains about 40,000 years ago as the river eroded the mountains. The river cut into the sandstone from a 25-million-year-old fossilized sea floor. Then about 15,000 years ago near the end of the last Ice Age when the area warmed it dried the river and plant cover became sparse and exposed to strong northwest winds which spread the sand eastward to Monahans. 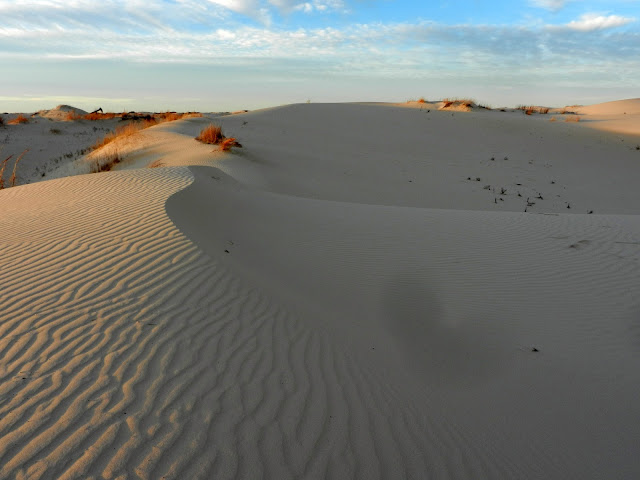 Sand is a piece of eroded rock that is larger than silt and smaller than gravel, about .05 to 2 millimeters in diameter.  Dune sand grains are all about the same size because wind cannot move the larger particles, and the finest pieces blow away.  The dunes don't blow away because the winds change direction from season the season even though they blow around quite a bit they end of about where they started. These sand dunes are a part of the Chihuahuan Desert, the largest desert in the North America. 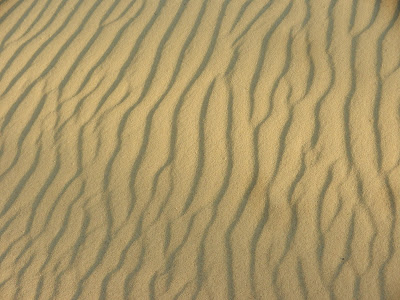 The ripples shown in the photo above are created by saltation, the bounding movement of windblown sand. The distance between the ripples' crests is the distance a sand grain travels in one bounce. Here is a new word for you, saltation, from the Latin, saltus, meaning "leap".

From the online literature I learned that Native Americans were present in this area as far back as 12,000 years ago. Various Indian tribes used the area for temporary campgrounds and a meeting place, finding game, abundant fresh water beneath the sands, acorns, and mesquite beans for grinding into paste with their stone tools.  I too found it to be a good temporary campground as I retired to my camper for the night and listened to two Great Horned Owls calling as the desert darkened.
Posted by squirrel at 12:11 PM

Beautiful shots of the setting sun on the sands. The ripples remind me of a Zen Garden created by Mother Nature.

Richard and I visited there in 2010 and scattered Daddy's ashes in the wind. We too got there right at sunset. It was amazing. I took lots of photos.