Anza-Borrego Desert in California is a place I have know about since I was stationed at Miramar Naval Air Station but I had never taken the time to visit until now.  It encompasses some of the most diverse desert landscape in the world within its 600,000 acres. Nearly two-thirds are pristine wilderness and has a wonderful array of desert wildflowers.  Unfortunately most of them bloom in March and I was early by a week or two but I didn't regret going early. 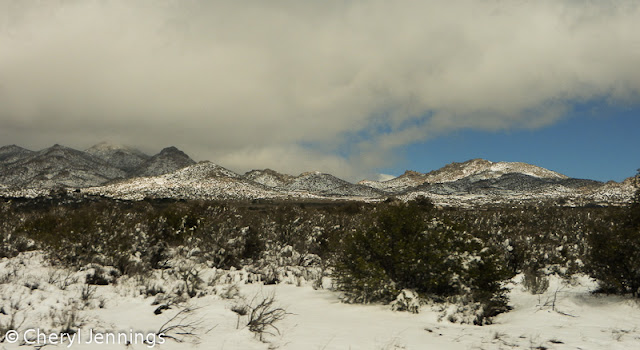 The drive to the Anza Borrego Desert was much more exciting and beautiful than I had anticipated.  I thought I would just be driving along an Interstate but that was not the case.  As I approached San Diego I turned off and began my ascent up into the mountains.  I became a little worried as I was passing cars coming toward me with snow on their hoods and roofs.  My camper is not a four wheel drive and I would have to turn back if the roads were icy with snow.  But luck would have it and the road remained dry but the mountains surrounding me were covered with a dusting of snow which made them grand to look at.  At some point it was almost impossible to go very far without stopping for a photo opportunity. I found this wonderful fellow standing guard. 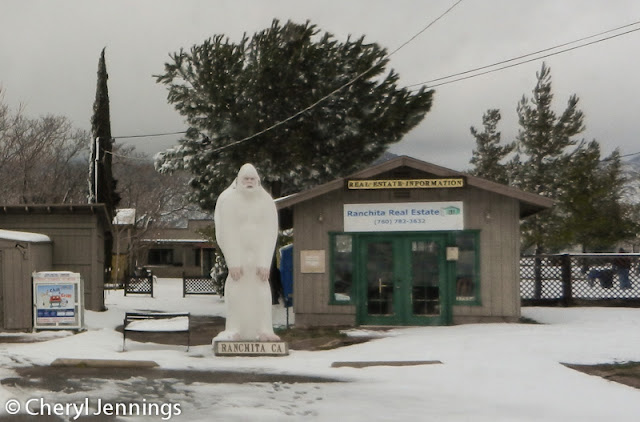 Finally I began my descent into the desert valley. 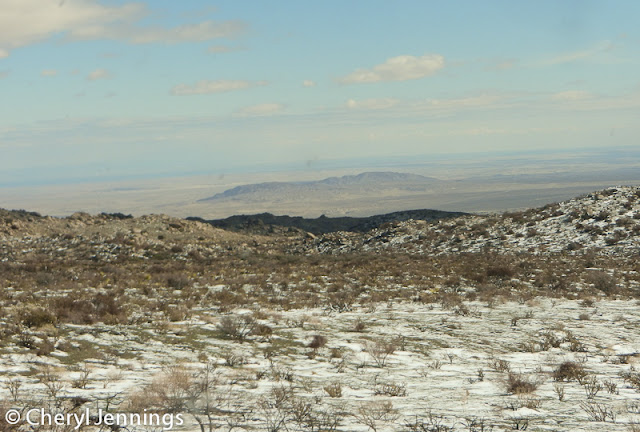 My first stop was the visitor center to find out what was going on and to purchase a map.  I took the short but colorful trail around the center and found some interesting flowers in bloom.  One of the most unusual ones I saw was a Fairyduster (Calliandra eriophylla) a little shrub about a foot or so high with gray twigs. The leaves are divided into small leaflets like a mimosa.  The flower is rose to reddish purple with dense heads on the ends of short stems, with conspicuous tufts of reddish stamens that may be almost an inch long that look like feather dusters. 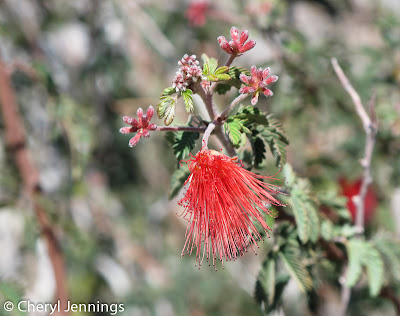 I foun a Leaffooted Plant Bug nearby called Leptoglossus zonatus. 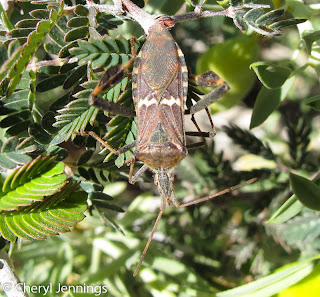 Another red flower in bloom caught my attention when I spotted a humming bird fly to it for a sip of nectar.  It was a Chaparosa or Belopperone (Justica califonica) about 2 feet high shrub and looked almost leafless. The Spanish named it after their name for Hummingbird.  The Native Americans are known to have sucked the flower for its sweet nectar like I sometimes do with Honey Suckle. 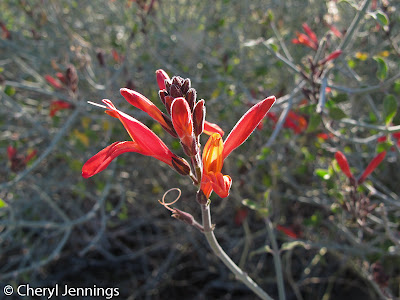 Moving on I found Desert-lavender (Huptis emory) that was either just beginning to bloom or was about finished.   It is in the mint family and can grow 3-10 feet tall.  Bees love this plant and it is often called “Bee Sage”.  I had to move in slowly to not get stung. 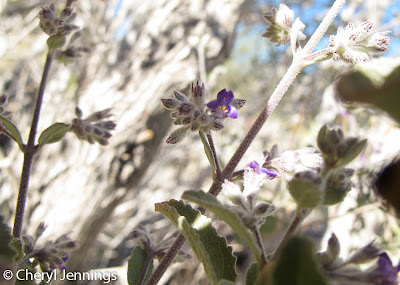 The visitor center is build on the side of a small hill and the roof is covered with soil blending in with the desert. At the top was a large Desert Agave (Agave deserti) in bloom.  It was too tall to get a good close up.  The root was baked and toasted by native peoples and I read that it tasted like sweet potatoes. The fibers were used for ropes and baskets. 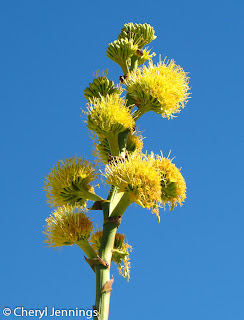 The most common yellow flower was the Brittlebush or incienso (Encelia farinose).  It is a member of the sunflower family and I do believe it is the same as the one I saw in Death Valley earlier this year but here there were many more.  The stems extrude a fragrant resin that is chewed by Native Americans and used as incense in the churches of Baja California. 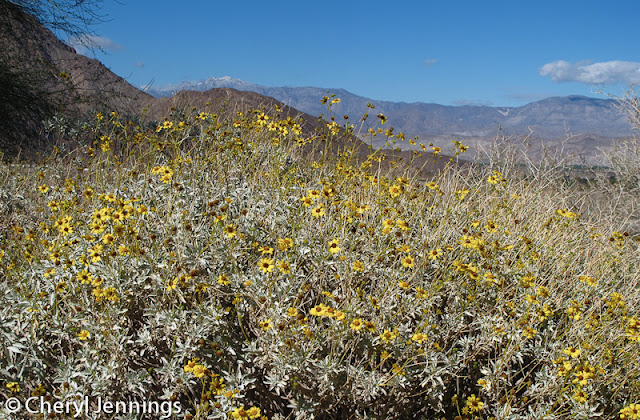 Another yellow flower was the Bladderpod (Isomeris arborea). 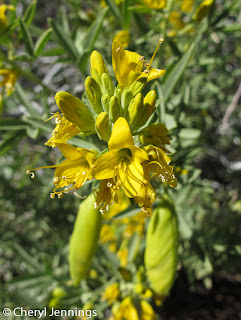 From the Visitor center I drove to my campsite for lunch and then set out to find a La Conti’s Thrasher.  The park naturalist said that they were singing and I might be able to find one in the more desert area so off I went.  I never did find the Thrasher but I did find one of those beetles that I had seen in Death Valley but this time I took a better photo. 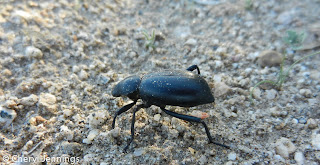 The only other life I observed were two colonies of ants not too far from one another.  I tried to channel E.O. Wilson and make good observations.  The first colony had a very big hole and they were all black.  The big one carrying large grains of sands and smaller ones, well, I don’t know what they were doing. 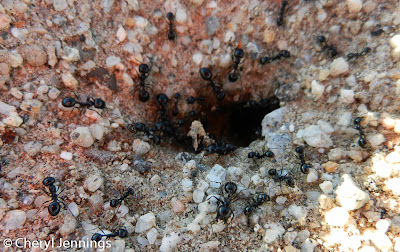 Just a couple yards away were a smaller hole with fewer ants that were red with black ends. If I leaned over to take a photo they stayed in the hole but once I moved they came rushing out.  It was a little tricky getting good photos. 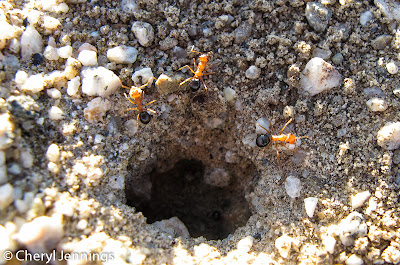 I drove back to the campground as the evening was approaching. 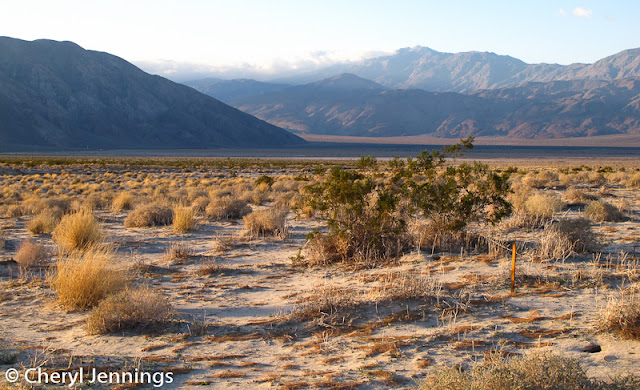 Love the lovely flowers! That last landscape photo is breath-taking. The lighting is just right1