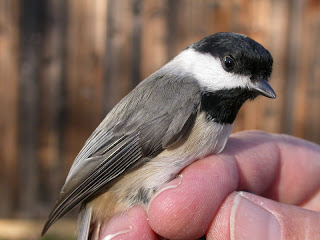 Weather in March is unpredictable, so my friends and I took advantage of the sunny day and went outside to soak up some vitamin-D from the sun. While sitting on my deck, we noticed the birds coming closer and fussing at us. It was meal time for them and we were in their dining room. Usually I fill up the suet feeder, lay out some meal worms and then go back inside, but today we stayed and the birds were confused. They were daring each other, like school boys, to touch the deck. Of course, it was the Carolina Chickadee (Poecile carolinensis) who made the first landing on the suet feeder. They are such brave little souls. It seems that even in the bird world it is the smallest who are the bravest, the ones who slip through the tight opening to save the rest of the group from disaster and death. Most small, mixed flocks have a couple of Chickadees among them who are usually the first to the feeders with their characteristic “chick-a-dee-dee-dee” call signaling that it is safe for the others to come on in. I think they were playing the bird edition of “Olly-olly-oxen-free.” The White Breasted Nuthatches, Titmice, Juncos, Red-bellied and Downy Woodpeckers were the big scaredies and hopped from branch to branch, afraid to come to the food. I imagine in much earlier times they would have been tame, like the wildlife on the Galápagos Islands, and wouldn’t have hesitated. Too bad those days are gone. As we went inside for lunch I could almost hear them saying, “It’s about time they left … that meal worm is crawling away!”


The photo was taken by me a few years ago at a bird banding station in Berkeley County, WV.
Posted by squirrel at 3:09 PM

Email ThisBlogThis!Share to TwitterShare to FacebookShare to Pinterest
Labels: Birds