Lately a few people have asked me about the big black and yellow spiders in everyone’s garden. It is usually an easy question to answer because there aren’t too many others like it but there is one I have seen in the Blue Ridge Mts. where I live. But let’s start with the Black and Yellow Garden Spider whose scientific name is Argiope aurantia pronounced Ar-je-oh-pe . ar-an-te-ah. 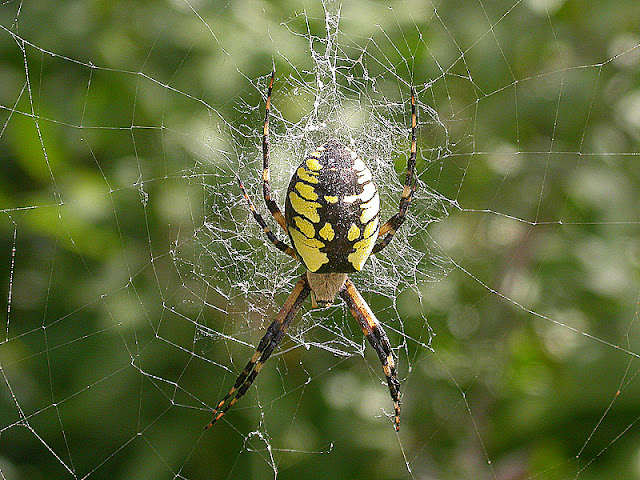 Argiope aurantia (Black and Yellow Garden Spider)
They are around 2.5 inches, including the legs, so they are not easy to miss. The female is large and has silvery-white hairs on the carapace. The male is about one-fourth the length. The photo below shows both the male and female with the male on the left (underside view) and female on the right (top view). If you look closely you can see he has very large palpi. 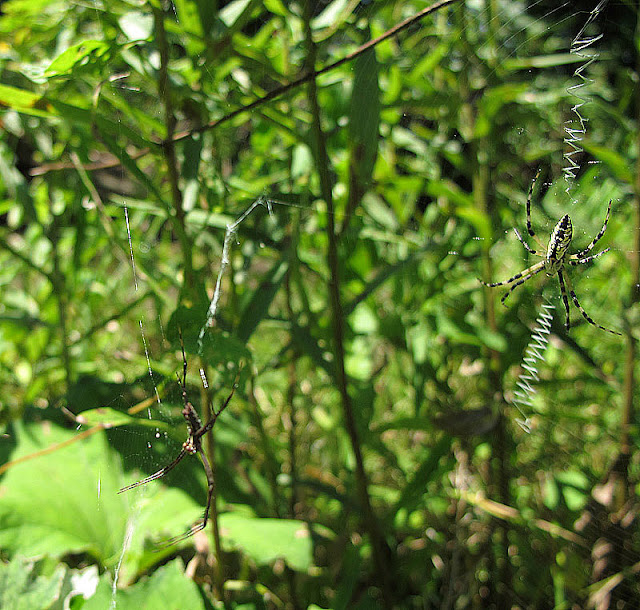 Argiope aurantia male (left) and female (right).
You can sometime see the young in June or July but it isn’t until the fall when they are full grown and most obvious. The web she makes is an orb web with zig-zags called a stabilimentum in the center. 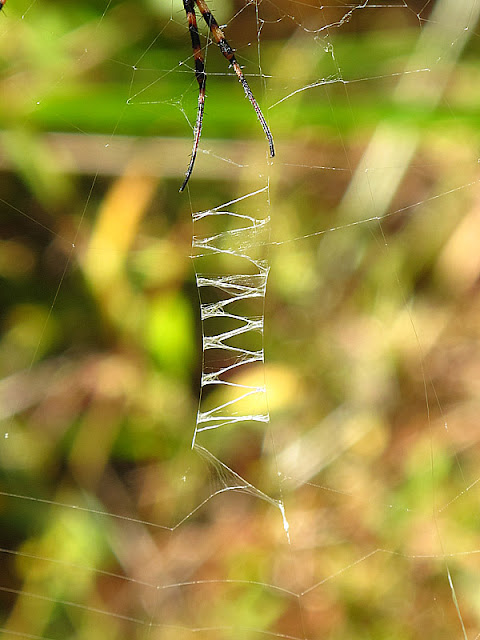 Stabilimentum of Argiope trifasciata (Banded Garden Spider).
The males make a small imperfect web of their own near the females. You should look for him next time you see the large female. In September she lays eggs in a tough tan pear-shaped cocoon (about the size of a grape) hung among the grasses and limbs of bushes. Then she dies shortly after the first frost in October. 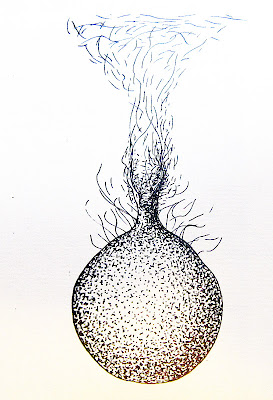 Argiope aurantia (Black and Yellow Garden Spider) egg sac.
Today after work, after I had already posted this blog I went out looking for spiders and found this egg sac of the Argiope aurantia. I actually found two of them near each other but one was among some leaves and I couldn't get as good of a photo. I was so excited!!! I love to learn about things and then find then in the wild. 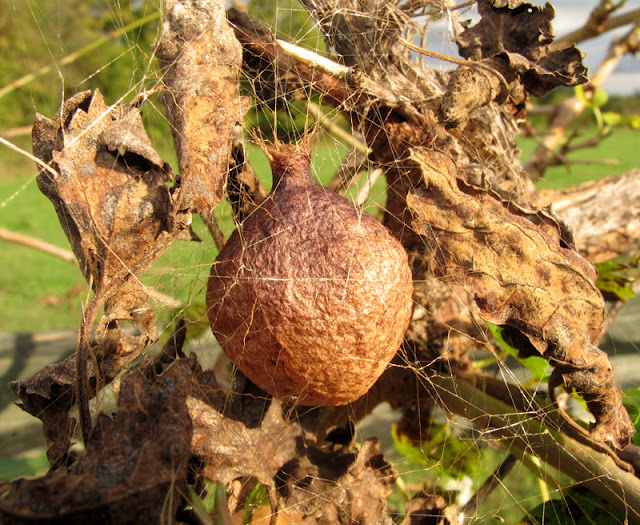 Here is a photo of the underside of one that got nervous and ran to the side when I was taking photos. You can see the orange spinnerets. 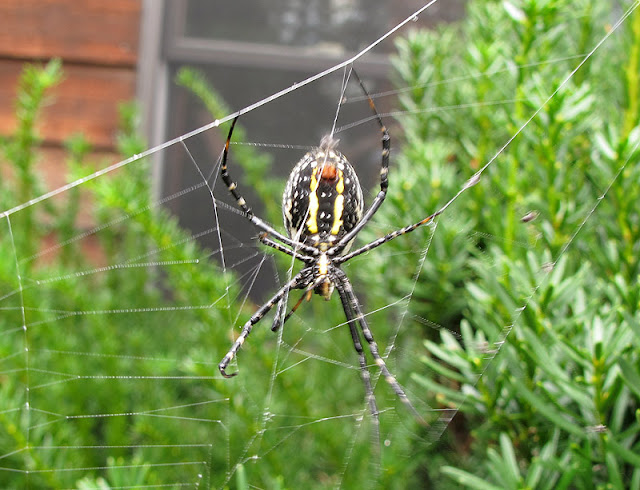 Argiope aurantia (Black and Yellow Garden Spider).
Now the other Garden spider I have seen is the Banded Garden Spider which I found in the swampy section of woods where I often explore. It is a Argiope trifasciata and like the A. aurantia it is a member of the Family Araneidae. The underside looks very similar. 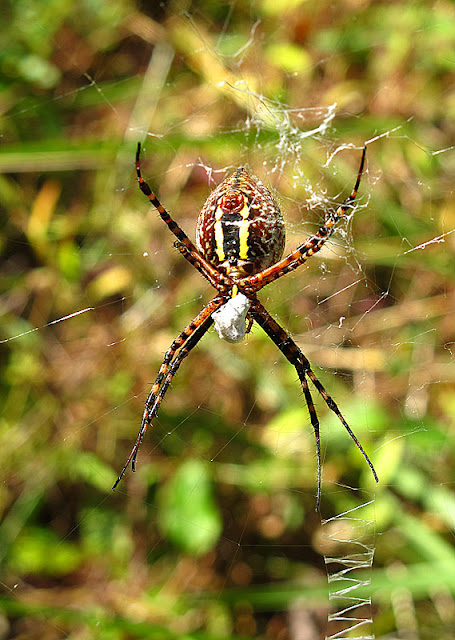 Argiope trifaciata (Banded Garden Spider) sucking on a wrapped up insect.
But the top is totally different. During late August and September, a male and female can be seen together in the same web. I looked but didn’t see any others. The A. trifasciata is a little more skittish and drops to the ground at the slightest disturbance. I was lucky that this one put up with me as I circled to take photos. 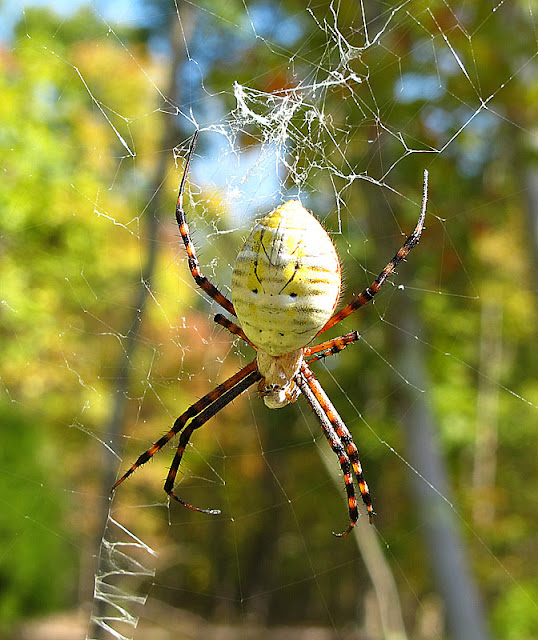 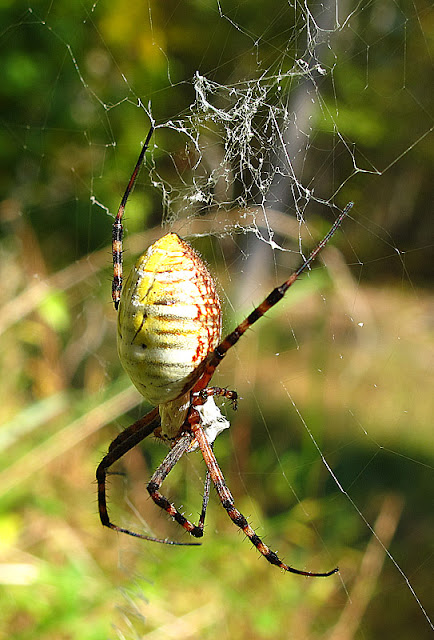 Argiope trifasciata (Banded Garden Spider)
They are normally a little thinner than the A. aurantia but I think this one was about to lay eggs. The egg case is usually grayish and flat on top like a kettle drum. I went back later to look for an egg case but it was impossible to find. 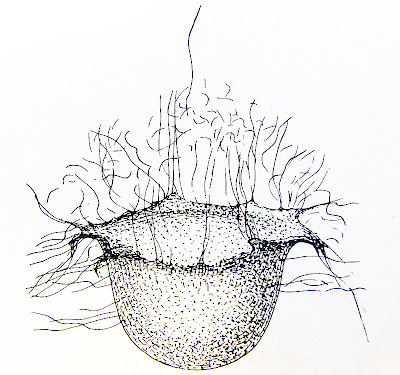 The other cool thing I found today was a male Argiope trifasciata and yes he was on the same web, up on the top left corner. I could only get a photo from the underside but you can still see he looks very different from the female. 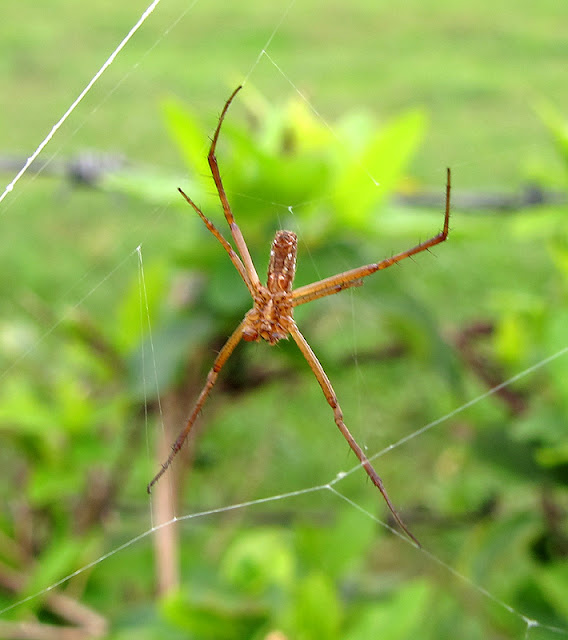 Reference and egg sac drawings from How to Know the Spiders by B. J. Kaston and Elizabeth Kaston copyright 1953.


Here is a good link to Camera Critter for more interesting and fun critters. Click HERE.
Posted by squirrel at 7:36 AM

You really outdid yourself with this post. Great shots and wonderful information for identifying not only the spiders but their egg sacs as well.

I have to admit spiders aren't my favourite critter, but you made them, their webs, and their nests works of art. Have you ever seen the blog by Wanderin Weeta from BC? She does lots of closeups of nature. - Margy

Lovely critter shots, love the first one the most!

You got splendid spider photos there, and also very informative post. We also have yellow and black spiders but they are more elongated than oblong and we as kids were scared of them because of their very sticky webs.Sometimes they are 3 in long, and make their webs above our heads on the trees. I also dont know how they are called.

I expected to see squirrels and I yikes I see spiders, they are so disgusting, I run away when I see one. But I have to admit that your pictures are really very beautiful.

Cheryl thank you. I forgot to link to the blog I did on egg sacs. You can see it at http://squirrelsview.blogspot.com/2010/11/spider-egg-sacs.html

Powell RB yes I have seen Wanderin Weeta's site. It is nice.

Alwaysbackroads you might enjoy the blog I did on the spider webs at: http://squirrelsview.blogspot.com/2010/07/spider-webs.html I forgot to add the link to this blog.

Hi, Squirrel! I have included the link to this post in this month's Circus of the Spineless #66. Beautiful spider shots!

I really have to get my courage on and go looking for spider with my camera....